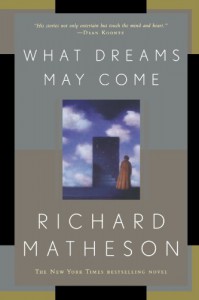 A LOVE THAT TRANSCENDS HEAVEN AND HELL

What happens to us after we die? Chris Nielsen had no idea, until an unexpected accident cut his life short, separating him from his beloved wife, Annie. Now Chris must discover the true nature of life after death.But even Heaven is not complete without Annie, and when tragedy threatens to divide them forever, Chris risks his very soul to save Annie from an eternity of despair.Richard Matheson's powerful tale of life---and love---after death was the basis for the Oscar-winning film starring Robin Williams.

Chris Nielsen is killed in a car crash and has to find his place in Heaven without his beloved Annie. Though the place is nice enough, Chris cannot stress enough to the people there that there is no heaven for him without his wife by his side.

I was exhausted but I couldn't rest, my sleep broken by Ann's crying. I tried to rise, to comfort her. Instead, I hovered in a limbo between darkness and light. Don't cry, I heard myself murmur. I'll wake up soon and be with you. Just let me sleep awhile. Please don't cry; it's all right sweetheart. I'll take care of you.

Finally, I was forced to open my eyes. I wasn't lying down but standing in a mist. I started walking slowly toward the sound of her crying. I was tired, groggy. But I couldn't let her cry. I had to find out what was wrong and end it so she wouldn't cry like that. I couldn't bear to hear her cry like that.

I moved into a church I'd never seen before. All the pews were filled with people. I saw her sitting in the front pew, dressed in black. I could still hear the sobbing even though Ann was silent. It's in her mind, it came to me; and our minds are so close I can hear it. I hurried toward her to stop it. I stopped in front of her.

"I'm here." I said. I was crying too. I would have given up my soul if only she'd been able to see me for a minute, hear my voice, receive my comfort and my love.

This book pulled me in from the first page, but pretty much stayed a 4 star read for me until near the end, when Chris verbally gives Annie a list of thank-yous, 4 pages worth. And that moment was right up there with some of the most beautiful passages I've ever read anywhere. I was damn near sobbing by the end of those pages!

Though I gave it five stars in the end, there were a few things in the story that slightly bugged me. I didn't love Matheson's image of heaven -- no need for food, drink or sex? Everyone trying to stay busy at all times? What fun is that?! And the sound of Chris's inner dialogue sounded a little odd to me. I couldn't quite place what it was but it didn't seem to flow entirely naturally. The text was originally written in 1978, which may have something to do with it. I've read a number of books from that era that seem to have stiff, dated writing. But the more I read, the more the style seemed to date back even more. It started sounding a little more classic lit. ... something like a Robert Louis Stevenson novel. Which I don't mind... love me some RLS :-) It just took some adjusting on my part, as the reader. At times, I was also reminded of John Bunyan's Pilgrim's Progress -- sometimes the story gets a little heavy-handed with the religion, philosophy and metaphysics and the novel part gets lost a bit.

Oh, and there was the bit that might have been an author memory lapse... the main character, Chris, meets up with his cousin Albert in heaven and Albert serves as his sort of tour guide to the afterworld {Albert works as a sort of social worker for those still in purgatory areas, to try to get them fully into heaven}. Albert and Chris are sitting there chillin', Albert starts talking about how he died of "a lingering illness" but just a couple pages later Chris is recalling Albert's fatal heart attack? It doesn't play a big role in the overall story, it was just a little confusing.

The love story between Chris and Annie made for such compelling reading. Annie suffers from severe, persistent anxiety stemming from traumas she survived from childhood and early adulthood. By the time the novel starts, Chris and Annie are in their late forties. Chris takes Annie on nature trips because deep in nature seems to be the one place where Annie's mind finally quiets and she finds a small bit of peace.

"I'll tell you what it seems like," I told her. "It seems like last week that I spoke to a cute X-Ray technician trainee on the beach in Santa Monica and asked her what time it was and she pointed at a clock."

She laughed. "I wasn't very friendly, was I?"

After his death, to convince himself that he is, in fact, dead, Chris actually peers into his buried casket to make sure he's in there. Understandably freaked by what he sees. So glad I've opted for cremation when the time comes! Blech! Matheson also doesn't hold back on the descriptions of Hades later on in the story. I was physically cringing and curling up reading those passages! As disturbing as it was though, I had to laugh when Chris actually thinks of the phrase "all Hell broke loose" while actually in Hell having tortured souls trying to attack him. Ahhh, black comedy. :-)

So what was Chris doing in Hell so soon after entering Heaven? Well, shortly after his arrival in Heaven, Chris starts having nightmares about Ann suffering a variety of gruesome deaths. The symbolism he finds behind the dreams is heartbreaking. He gets word that Ann has died and may possibly be trapped in a layer of Hell. Chris, against the advice of Albert to leave her be until it's deemed she's ready to come out, decides to storm through Hell to find Ann, if only to keep her company and her fears at bay. Albert agrees to walk Chris through Hell, helping keep him safe until they can find Ann.

Though the story largely takes place in Heaven, the plot itself is actually very dark, even a little grim. It's not all hopeless and bleak though. Quite the opposite. I found the ending pretty inspiring and romantic and yes -- go get yourself a paperback copy and check out the thank you list on pages 234-8!

I felt a glimmer of peace within myself. And the beginning of a knowledge; an astonishing insight.