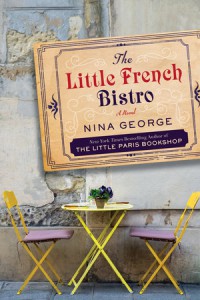 Marianne is stuck in a loveless, unhappy marriage.  After forty-one years, she has reached her limit, and one evening in Paris she decides to take action. Following a dramatic moment on the banks of the Seine, Marianne leaves her life behind and sets out for the coast of Brittany, also known as “the end of the world.” Here she meets a cast of colorful and unforgettable locals who surprise her with their warm welcome, and the natural ease they all seem to have, taking pleasure in life’s small moments. And, as the parts of herself she had long forgotten return to her in this new world, Marianne learns it’s never too late to begin the search for what life should have been all along.

**NOTE: This novel has also been published under the title The Little Breton Bistro

Marianne has spent too long in a loveless marriage. At the end of her rope, she takes a walk one night to the banks of the Seine River, where she makes the decision to end her life. Though she goes so far as to throw herself into the river, she is unexpectedly rescued and taken to the hospital to recover from the suicide attempt. Once out of the hospital, she makes the choice to relocate and rebuild her life in a new town, eventually settling on the seaside town of Kerdruc, in the Brittany area of France.

In Kerdruc, Marianne quickly comes to know a new definition of family among the staff of Ar Mor Restaurant, becoming especially close friends with the owner of Ar Mor, Genevieve, as well as Jean-Remy, the head chef nursing a bad case of unrequited love. Jean-Remy's pining away all the time has begun to affect his cooking for the worse. Lucky for him, Marianne's arrival means she can share her tips and tricks (from years of housewifery) for turning around any seemingly ruined meal. Immensely grateful for the help, Genevieve brings Marianne on as Jean-Remy's sous-chef. In return for helping him get his cooking back on track, he offers to help her improve her French. {Marianne, a German military wife who had transferred to France some time ago with her husband's job, had never gotten around to grasping much French, pretty much only learning enough to say "I am German."} Along with the crew at Ar Mor, Marianne also becomes acquainted with the sculptor Pascale and Pascale's longtime friend, the painter Yann.

"Get down from your cross, we need the timber."

(one of my favorite lines in the book!)

It is in this seaside community that Marianne really works to restructure her life after years of being stifled in a neglectful marriage, largely devoid of affection, with selfish, philandering husband Lothar. Occasionally the reader is given glimpses into Lothar's tightwad ways: always making Marianne get her shoes re-soled rather than ever allowing her new ones; always making her go through the irregular / clearance bins for her clothes; never getting gifts for anniversaries; taking himself on holiday but not her, etc. Marianne even shares details of her hospital stay after the suicide attempt: her skipping out on meeting Lothar at a restaurant that night; him showing up at the hospital rocking a Rolex and yachting clothes, whining about the money he wasted on a meal at that restaurant and a cab to the hospital to come check on her. When she asks for a hug, he quickly denies her. Imagine being in a hospital bed, feeling emotionally eviscerated over so many things, and you can't even get a hug from your LIFE PARTNER, of all people! Gives you an idea of what a softie this guy is. She also hints at examples of emotional abuse throughout the years of marriage that she often forced herself to shrug off... until she just couldn't anymore. So you can understand the need (or at least temptation) to slough it all off and start anew somewhere far away from your usual.

Shortly afterward, Lothar's lover Sybille had woken her from the wonderful illusion that a marriage, a house at the end of a turning bay and an indoor fountain were all a woman needed. Lothar had been determined to return to their normal daily routine as soon as possible after his affair with Sybille. "I've told you I'm sorry, What more am I supposed to do?" And with that the matter was closed. After a few years, her pain had subsided. Time had brought solace to Marianne, as had Lothar's secrecy about his other affairs, at least until it became too hard for him to keep lying. He started to leave a trail of clues in the hope that Marianne would make a scene and deliver him, but she had refused to do him that favor.

Quiet Marianne is consumed by fear. She fears death, but also sometimes welcomes it. With the realization that she's maybe moved through a life largely un-lived, she fears that she might not know how to change, or that perhaps the opportunity for change (of any kind) has passed altogether. But with the help of her new friends, she hangs in there... and in time, comes to experience her first crush since meeting her husband. This new love she finds herself dipping her toe in... the two of them are just adorable together and I found myself so excited for her. Yes, technically she is still married to Lothar, and normally I'm not down with adultery --- not in novels, not in real life --- but it's hard to blame Ms. Marianne for craving some heart tingles after going so long trying to make it work in a relationship that very clearly flatlined ages ago. Though I gotta say, a funeral might be an odd way to go for a first date.

I loved your grandfather, and after him, no one else. It is a rare form of happiness when a man makes your life so rich that you need no one else after him.

"Was he a magician?"

Any man who loves a woman as she deserves to be loved is a magician.

Just as Marianne is becoming reacquainted with the stronger, more fiery side of herself, a little something of her recent past makes a reappearance (as often happens in these kind of novels).  The quaint, light-hearted cover art of The Little French Bistro belies the darker themes of this story. In multiple scenes throughout the novel, Marianne continues to toy with the idea of making another suicide attempt. Though she always finds a way to talk herself away from it (or her friends do), Nina George writes a stark truth -- the underlying struggle that can go on in the mind of someone whose exterior seems to be doing well enough.

She suddenly felt an incredible fear of dying prematurely and not having had her fill when her final day came --- her fill of life, up to the top and over the rim. She'd never felt such a lust for life: the pain of having missed out on so much was threatening to blow her heart asunder. Never had the act she had considered committing struck her as more egregious: she had tried to put herself to death long before her time....Yann put his hand on Marianne's back, and her heart was pumping and beating, as if to say: it's far from over. Every second can mark a new beginning. Open your eyes and see: the world is out there and it wants you.

The writing here gets a little flowery in parts, but I ended up liking this one more than Little Paris Bookshop and it certainly left me curious to try out George's most recent novel, The Book of Dreams.