All In by L.K. Simonds 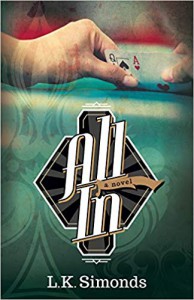 Twenty-nine-year-old novelist and blackjack dealer Cami Taylor seems to have it all—but just underneath her confident exterior and newfound celebrity is a young woman in trouble. Cami’s boyfriend, Joel, wants to get married, buy a house on Long Island, and raise a family—a life that’s a million miles from Cami’s idea of happiness. Her therapist suggests compromise and trust, but Cami would rather bolt like a deer. Breaking things off with Joel, Cami launches herself on a new quest for happiness. But her pursuit of pleasure only takes her further from herself—and toward a harrowing new reality unlike anything she’s faced before.

In her debut novel, L.K. Simonds introduces us to main character Cami (Camille) Taylor, who, on the cusp of thirty in the late 90s, has found professional success over the years as a blackjack dealer and published author with one best seller already under her belt. Cami's Long Island boyfriend, Joel, is more than ready to marry her and settle into domestic bliss; his only frustration with her is the emotional wall she tends to have up, blocking them from ever reaching that deepest level of emotional intimacy.

Cami's not even sure she wants to go as far as marriage. She's always valued her independence far too much. But she does love Joel, so she makes an attempt to work on her emotional wall by going to therapy. In the beginning, she hopes the gesture will appease him, but it soon becomes clear that her heart isn't in the therapy process at this stage in her life. Joel and Cami come to accept they just want different things in life and the nearly two year union quietly dissolves.

While splitting up felt like the right move, it still hurts to lose someone whose presence you've gotten so used to. She tries to dip her toe back into the dating world but the pickins' ain't great out there. Even when she thinks she's scored a maybe, things turn sour one night when he mentions his girlfriend, followed by "You didn't ask." UGH. It'd be super cool if it could just be an understood rule all the way around that if you're already in a relationship YOU DON'T GO FISHING FOR ANOTHER.

This little talk does wonders for Cami's already fragile mental state and she gets to reflecting on her former life, working casinos back in New Mexico as Leona Lingo (her birth name). She thought she'd finished with that era of her life, but feeling herself heading towards a dark headspace in NYC, she figures a trip back to her hometown of Phoenix, Arizona might not be such a bad idea. But "going home" just ends up being a safe space to binge on vices. By this point in the story I was reminded a little of that Charlize Theron movie, Young Adult.

Note: the mention of casino life does not factor largely into this story except through some of Cami's referenced memories.

More of the same isn't going to be enough. I can see that now. When I think about it, I realize it isn't strange at all to need new goals after having reached all the old ones. I should've seen this coming. I'm doing okay, professionally, and now I need to concentrate on feeding my soul. Just as soon as I figure out what exactly my soul needs.

Eventually Cami works her way back to NYC, where she has an unexpected introduction to distant relative Kate Davis. After a day spent getting to know each other, Kate invites Cami to a family reunion being held in Texas. This ends up being the start of a legit growing family bond between the ladies that will serve Cami well later in the story when she'll need all the support she can get after receiving some life-altering news.

Cami's main motivation for going to new places or meeting new people often seems to fall to "well, it'll be great material for the next novel." Though she's rarely in it to make new friends or grab life by the horns, she still grudgingly puts herself out there time and again. By doing so, life shows her (and through her experiences, the reader) that if one is willing to embrace experiences even halfway openly, the takeaway can be so much more than ever imagined. It's no different when Cami takes on Texas (even if she's inwardly laughing to herself about just how out of her environment she truly is). I did find it a little weird, though, her being flirty with Jake. Yeah, he's a distant cousin... but, still. Should be a pretty standard rule: don't hit on people at a family reunion!

Throughout the entire story, it's alluded to that there might be something off with Cami's health, but she drags her feet getting herself checked out. Finally, after a bout of sickness that scares her enough to finally make an appointment... the diagnosis the doctor comes back with... wow, I was not expecting the story to go that direction at all! Virtually nothing hints at it, save for maybe one scene. The reality check leaves atheist Cami pondering on God, life, all the big questions.

Cami as a character, well, she can be a tough one to bond with because she often reads emotionally flat. It makes sense, that's part of the character flaw in her that sort of sets her on this whole path. Still, it can make for frustrating reading when she comes off as so emotionless. But I don't think it's a matter of her being devoid of feeling, but more her being afraid to feel. Life experiences, the world at large... it's all left her with a lot of disappointment. You go through enough of that for long enough, you get to where it seems like the easier path to just numb your heart to any more stabs. As far as other characters, it seemed like each one has a quality to them that'll have you saying YES! I know someone exactly like that! So, bravo to Simonds on wonderful attention to character detail!

There is an understated lyrical quality to Simond's writing style that I ended up quite liking. It took me a little time to really get into this plot... but I'll admit I wasn't in the best mood the day I decided to start this one. Initially, I wasn't sure I was going to like Cami, but, if I'm being honest, it might've been because I was seeing more of myself in her than I liked LOL, some of the sides of me I'm not so proud of. But like Cami, I'm working on them in my own time and I'll get there, eventually.

FTC DISCLAIMER: BookCrash.com & author L.K. Simonds kindly provided me with a complimentary copy of this book in exchange for an honest review. The opinions above are entirely my own.