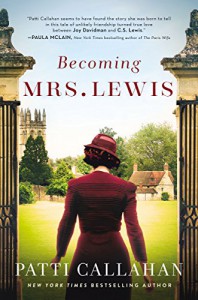 In a most improbable friendship, she found love. In a world where women were silenced, she found her voice.  From New York Times bestselling author Patti Callahan comes an exquisite novel of Joy Davidman, the woman C. S. Lewis called “my whole world.” When poet and writer Joy Davidman began writing letters to C. S. Lewis—known as Jack—she was looking for spiritual answers, not love. Love, after all, wasn’t holding together her crumbling marriage. Everything about New Yorker Joy seemed ill-matched for an Oxford don and the beloved writer of Narnia, yet their minds bonded over their letters. Embarking on the adventure of her life, Joy traveled from America to England and back again, facing heartbreak and poverty, discovering friendship and faith, and against all odds, finding a love that even the threat of death couldn’t destroy.
In this masterful exploration of one of the greatest love stories of modern times, we meet a brilliant writer, a fiercely independent mother, and a passionate woman who changed the life of this respected author and inspired books that still enchant us and change us. Joy lived at a time when women weren’t meant to have a voice—and yet her love for Jack gave them both voices they didn’t know they had.  At once a fascinating historical novel and a glimpse into a writer’s life, Becoming Mrs. Lewis is above all a love story—a love of literature and ideas and a love between a husband and wife that, in the end, was not impossible at all.
Amazon.com

As the title hints, Becoming Mrs. Lewis is a fictionalized look at the life of Joy Davidman, the woman who would eventually become the one and only wife of author C.S. Lewis, largely known for his beloved Chronicles of Narnia series. While the prologue briefly dips into Joy's childhood in the 1920s, the bulk of the story runs throughout the 1950s, finishing in 1960, the year of Joy's death. Her death would sadly inspire another classic work of Lewis', A Grief Observed, chronicling his mourning period. But let's focus more on how this unique bond came to be.

Callahan's story, as it pertains to C.S. Lewis (known as "Jack" by close friends), opens in 1950. At that time, Joy is Joy Davidman Gresham; her husband, Bill Gresham, also a writer (Lewis was Joy's second husband). The story informs the reader that for years Joy has been struggling with her husband's alcoholism and philandering ways. But she does her best to stick things out for her sons. She also admits that during this first marriage she considered herself an atheist, until one night when her husband wouldn't come home, called home hinting that he was having suicidal thoughts. In desperation, Joy falls to her knees in prayer, not entirely convinced it will do anything but just needing to latch onto some shred of hope. In a moment that spans less than a minute but also feels like ages, Joy is convinced she's having a connection with the Holy Spirit. For the next three years, she seeks out every book she can get her hands on to try to find answers to what she experienced. Her newfound passion for theology brings Lewis' works into her hands. Nothing gives her peace like his non-fiction essays on philosophy and religion. She particularly moved by The Screwtape Letters and The Great Divorce.

By this time, the Greshams are still struggling to regain a healthy marriage, so Joy decides to write to Lewis to ask his advice on some of the questions plaguing her. She's ecstatic when she receives a reply back! So starts a friendship in letters, because it turns out there's a comfort in Joy's letters that Lewis didn't realize he so strongly needed. Joy being a poet and novelist herself, as well as having some theological pieces of her own recently published... well,the two can't deny they might have stumbled upon kindred spirits within each other.

This correspondence carries on over the course of years, Lewis in England, Joy in The States. Lewis makes several offers for Joy to come visit him and his brother at The Kilns, their personal residence. Having struggled with health problems all her life --- low thyroid, lung and kidney infections, chronic fatigue --- her body eventually declines to the point where Joy feels an escape to England might be just the thing to turn her health right. With her physical troubles being worsened with her stressing over her books not selling as well as she'd like and the arrival of her cousin Renee, moving in with two more kids in tow, Joy increasingly feels more sure that England is the place to take a breather from everything, focus on her health and work on finishing some writing projects that will bring in some much needed money for the family. So England also becomes a quiet "research trip" for her WIP novel about King Charles II.

While Joy doesn't stay with Lewis on those early trips to The Kilns (she's still a married woman for most of the book, after all), she does visit with the Lewis brothers quite often. It becomes pretty evident, the longer one reads into the story, that the Gresham union is largely being held by a sense of duty and history rather than much remaining love and friendship. They might have pet names for each other, but Bill Gresham (in this story) often speaks to Joy with a thinly veiled demeaning, patronizing tone to his words. Though she's a published author with a number of professional accolades (Callahan's historical note at the end points out that the real Joy graduated college at 15!), he still insists on going about as if HER writing is a hobby, his work the real breadwinning stuff. When Joy and Jack first speak, right from the get-go she has an instant sense of being valued and acknowledged. Even just as friends, Lewis is constantly praising Joy's work and values her opinion as an industry colleague. When Lewis says to Joy, "Our friendship is big enough even for the sorrows." --- that's a HUGE statement!

The connection works great as long as it doesn't go beyond the boundaries of strictly friendship --- philia, as Lewis refers to it. That's not to say they both don't feel more. Both are definitely aware of intensified feelings as the years pass. But there's plenty working against them, in Lewis' mind. He doesn't love Joy's confession about her meeting and getting involved with Bill when he was still with his first wife, but Lewis can brush that off as a "I didn't know you then" moment. But even after Joy's divorce from Bill is finalized, Lewis still hesitates to have ANY bodily contact with Joy, not so much as a brush on the arm most days, because now she is a divorcee, which is frowned upon in Lewis' church. They eventually find a way through these confusing feelings, the turnaround largely brought about by Joy's cancer diagnosis shortly after she and Lewis decide to marry (the first time around, it was essentially a green card marriage, solidified later with a second ceremony).

This does seem to be one of those stories you have to dedicate some time to --- there's a lot of themes covered and it doesn't always move terribly fast, but I was never bored! The early chapters hit the heavy topics early on: the prologue briefly referencing child abuse, the first chapters past that bringing up alcoholism, PTSD, abuse, suicidal tendencies... spouses who have these things and the spouses caring for them. Early in Part 3 there is also a scene of spousal abuse when Joy confronts Bill once and for all about his infidelities and he attacks her for it.

While the topics of philosophy and religion, references to Lewis' nonfiction Christian essay collections, etc do get somewhat heavy at times, much of the story is more about the various roles and difficulties a woman has to navigate throughout the course of her life. Much of Joy's story seems to be a woman's 30+ year journey towards addressing "daddy issues", as some might call it these days. There's a father she works so hard to please, but who is so quick to backhand her over a B on a report card, of all things! In that moment, something breaks in her and her path from that point on becomes an obsessive drive to prove to everyone that she is worthy of love and admiration. Her story is also one of a woman's aggravating struggle to be taken seriously by the medical community. Every complaint she takes into a doctor's office --- nausea, fatigue, leg pains, heart palpitations --- is regularly dismissed as rheumatism, middle age, "lady troubles".... until the day she loses the ability to walk and a doctor says her body is riddled with cancer that's probably been growing in her for at least seven years!

Those of you drawn to this book for the sheer "bookish" aspect, Callahan delivers on that front as well. You'll see plenty of literary figures pop into the story, from Lewis's good buddy JRR Tolkien... he wrote something people are always raving on about, what was that.... :-P .... mention of Joy having lunch with P.L. Travers (author of Mary Poppins stories), has a doctor consultation with a doctor who happens to be Graham Greene's brother... there's even a funny discussion where Joy is having a chat with friend Dorothy Heyward, whose husband wrote the book Porgy & Bess that was later turned into the famous stage production. Dorothy mentions how she did much of the work on the stage adaptation but for a time her contributions went largely uncredited. The fact itself -- not exactly laughable --- but the ladies have a little commiserating chuckle about their similar circumstances when Joy is at a particularly low point.

In the end, Joy's story made me that much more grateful to be in a solid relationship these days, deeply rooted in honest friendship. Having been on the other end of the spectrum myself --- having experienced a previously unhealthy cohabitation like Joy did --- I can tell you it makes all the difference to one's soul to find a centered sense of being within a cozy, supportive relationship where your partner doesn't guilt trip you for health issues beyond your control or accuse you of being lazy or self-indulgent when you have days where the energy just isn't there no matter how hard you try, someone who encourages your passions and professional pursuits, rather than feel threatened by them.

I'll close on saying that Callahan was also successful in not only motivating me to pick up some of these still-unread copies of Lewis' essays parked on my shelves but also in checking out Joy's works, which I'll admit, I was largely unacquainted with prior to diving into this story.