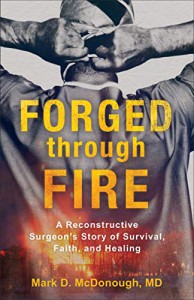 When Mark McDonough was a teen, a catastrophic fire claimed the lives of his mother and younger brother. It also left Mark with burns on over 65 percent of his body. During a long and painful recovery, his faltering faith in God was strengthened by a remarkable near-death experience. Inspired to pursue a career as a plastic surgeon to help those who suffer as he has, McDonough has overcome numerous other adversities on his journey, including addiction and a stroke. Now he shares his incredible true story of survival and perseverance to bring hope and healing to those dealing with great physical and emotional pain. Anyone who has suffered or watched a loved one suffer from a personal trauma, disease, or loss that has tested or stolen their faith and exhausted their emotional resources will find real hope in this redemptive story.

In 1976, author Mark McDonough, as a teen, survived a house fire that tragically took the lives of his mother and youngest brother while also leaving 65% of his own body covered in deep burns. McDonough uses Forged Through Fire to share with readers his story of painful healing --- both emotionally and physically --- and the life lessons learned along the way.

Doctors roughly calculate the mortality or likelihood of burn death by adding the age of the victim to the percentage of burns relative to their total body surface area. Sixteen years of age plus burns to 60-70% of my nearly naked body indicated that I had roughly a 20% chance or less of surviving.

In addition to surviving the house fire, McDonough also includes stories of other medical challenges he's survived that required similar therapy programs, from contracting Guillian-Barre Syndrome as a small boy (which led to him temporarily being placed in an iron lung) to being surprised by a stroke as a young married man. If that's not enough, he also has a tale of falling prey to but eventually overcoming a period of alcoholism --- something he always promised himself would never be part of his life, despite coming from two parents who also struggled with alcohol addiction. McDonough's experiences with addiction begin as a way to self-medicate the pain of his injuries. That particular pain management option begins to lose its allure for him, but once a habit develops, the process out is a tricky one, requiring much dedication and patience.

Many claim that when faith is strong enough, there is no cause for fear. But for me, it was within the context of fear that my quest for faith began. It seemed only natural that I should fear the potentially challenging obstacles ahead or the pain that I expected to confront along the way. Yet, I was learning that I could have those fears while remaining faithful that God would stay nearby if I asked him to, helping me meet the demands head-on.

WARNING, READERS: THIS BOOK IS NOT FOR THE SQUEAMISH! I have a pretty strong stomach for most things and even I was cringing and squirming through several of the medical procedure descriptions shared here. It's not ALL rough. I mean, there are passages describing some of his therapy including learning to speak and swallow again because his throat lining was so badly damaged in the fire. He mentions developing pressure sores from being kept supine for so long while waiting for his skin grafts to take. Description-wise, those parts aren't so bad, but the OTHER parts --- the cleaning of the wounds (when he talks of having the cleanings done with Betodine --- I had my own memory recall from that one! The brief but intense BURN of that stuff! *shudder* It is effective though!), the bandage dressing, anathesia not taking and him waking up during one of his surgeries.... yeah!

Some of the therapists and doctors I met, like Dr. Fratianne, were among the most intelligent and admirable people I knew. I respected their character and their demonstrated ability to care. A few, however, had no idea about how to communicate or deal with people. They could tend to the body but overlooked the person, and they all but denied the spirit. I felt particularly sensitive to issues of pain and being dependently at the mercy of others; this was where I felt I could really make a difference and affect a positive change. I began to nurture that notion.

Keep in mind, this memoir is written by a doctor, so it naturally does run heavy with medical terminology, but to his credit McDonough does a pretty solid job of quickly following up with an explanation in layman's terms. He also shows incredible talent for getting his readers to truly feel the struggle and anguish of his painful journey to "being okay", you might say. McDonough doesn't hold back about keeping things real regarding his emotions, frustrations, the trying path of learning to overcome new physical limitations, and ultimately the joy in small victories during this arduous experience in healing. And healing wasn't just about his skin resealing or him regaining movement. McDonough also gets into the shift in the bonds between him, his father, and his surviving brothers, as well as the guilt associated with the amount of attention his outpatient recuperation period required of everyone.

Contrary to the beliefs of many, nowhere in the Bible does it say that God won't give us more than we can handle. But much is written about how God will provide the strength we need to survive those things we fear handling.

After intensive physical and occupational therapy sessions (one story notes he was able to finish high school, in part, because the school accepted his hours of therapy as PE credits), McDonough is inspired to become a physical therapist himself. His experiences with patients in this field later encourage him to take it further, becoming a reconstructive surgeon. With his work in medicine, and now this memoir, McDonough hopes that his story can inspire others working to overcome various traumas to continue fighting the good fight.

Dr. Frat spoke about how some people get stuck harboring resentments, exhausting themselves over things of the past that they don't understand. Something started to stir inside me. I knew what it was like to have no energy left to do anything.  Why waste those precious resources on things that aren't going to change anything? Why not invest that limited energy or strength into something real, positive, and in the here and now, not in a past that cannot be changed? In another part of this memoir, McDonough also mentions the guilt

his father struggled with because of new smoke detectors

until he came back from his business trip. McDonough's father was

on this trip when the fateful fire broke out.

On a sidenote, kudos to him for closing his acknowledgements section with a shout-out to EMS workers. As a firefighter wife, I had to smile at this! :-)

I was also not expecting him to close the book with an eyewitness account of the murder of singer / Youtuber Christina Grimmie!

Honestly, I'm surprised this hasn't been optioned as a movie, but I won't be surprised if I see it is later.

FTC DISCLAIMER: Revell Books kindly provided me with a copy of this book in exchange for an honest review. The opinions above are entirely my own.