The Selected Works of T.S. Spivet by Reif Larson 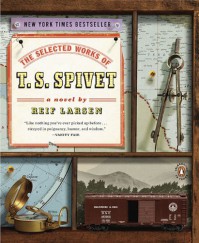 When twelve-year-old genius cartographer T. S. Spivet receives an unexpected phone call from the Smithsonian announcing he has won the prestigious Baird Award, life as normal—if you consider mapping dinner table conversations normal—is interrupted and a wild cross-country adventure begins, taking T. S. from his family home just north of Divide, Montana, to the museum’s hallowed halls.There are some answers here on the road from Divide and some new questions, too. How does one map the delicate lessons learned about family or communicate the ebbs and flows of heartbreak, loneliness, and love?

Our ranch house was located just north of Divide, Montana, a tiny town you could miss from the highway if you happened to adjust your radio at the wrong moment. Surrounded by the Pioneer Mountains, Divide was nestled in a flat-backed valley sprinkled with sagebrush and half-burnt two-by-fours, a reminder of when people actually used to live here.

His mother is a coleopterist, a scientist specializing in the study of beetles, while his father is a hard working rancher. While it might appear that they come from wildly different worlds, somehow it works. But the family has been mourning the loss of T.S.'s brother, Layton, who died by accidental gunshot at the young age of ten. Since then, T.S. has struggled to bond with his father. His mother also tends to bury her grief in work, so much of the time T.S. is left to fend for himself in many areas.

"Phosphorus is like a woman who is never satisfied with what she already has in her clutches."

T.S. finds comfort in his appreciation for trains as well as an obsession with cartography --- creating maps / schematics for nearly anything that catches his interest. At one point he even tries to work out maps for the entirety of Herman Melville's Moby Dick --- can you imagine! Some of his work, through a friend of his mother, gets sent over to the Smithsonian museum for review. Some time later, T.S. gets a surprise call from the museum notifying him that he's been chosen to receive the Baird Award.

The folks over at the Smithsonian are under the impression that T.S. is a grown man. Naturally there's going to be some quick explanation required on his part, should he accept the award in person... but after some debate he decides to take the chance and so sets out on a cross country trip from Montana to Washington, D.C. --- hobo-ing it across state lines via numerous trains --- learning numerous coming-of-age type life lessons along the way. He also has what's dubbed an "eccentric challenge" where he has conversations with a Winnebago he hides in during a portion of his travels, then claiming the Winnebago says it wishes to go by the name "Valero".

This "unique format" style book can come off as a bit of a project read. The page count comes in at just shy of 400 pages, with illustrations & sidebar text (aka marginalia) on nearly every page. Almost like stories on stories on stories. The plot is divided into three parts --- Part 1: The West; Part 2: The Crossing; Part 3: The East. There's some mild cursing within some of the dialogue, so parents or educators may want to give a pre-read through before handing off to younger readers.

While he may not always be the most socially warm character to spend time with, T.S. has an admirable straightforwardness and lust for knowledge that makes it easy to root for him. He's so dedicated to his craft and his family, you want good things for him! That said, the story does suffer through periods of monotony and boring content, sometimes worsened by T.S.'s insistence on conducting an internalized survey on the inner workings of HIS boredom. The action picks up in Chapter 10, around the 250 page mark, during a scene where T.S. arrives at a Chicago train yard. Those dedicated enough to this format to make it to the end, there's a pretty impressive speech little Spivet gives at the Smithsonian. He settles in and gets all heavy and deep with the crowd, sharing thoughts on life, death and one's purpose.... remember he's only supposed to be twelve!

Booknerds can also have a moment to geek out with the fictionalized brief appearances of Louisa May Alcott and Ralph Waldo Emerson, in connection with T.S.'s ancestors Elizabeth and Emma Osterville. 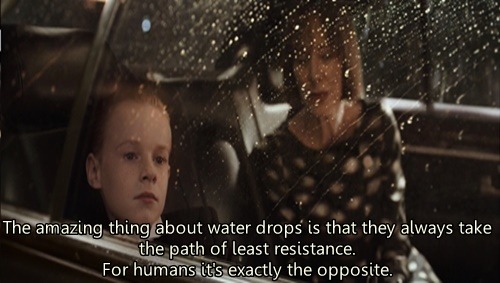 Yes! A movie was eventually made of this unique and creative story! A script was put together and passed through multiple directors who all claimed it was impossible to adapt for the screen. Then in 2013, the project was passed to French director Jean-Pierre Jeunet, who reworked the script and brought the book to life on screen under the name The Young and Prodigious T.S. Spivet. Though a beautiful, imaginative film finally came out of the long process, even Jeunet came away saying this movie "was a bear to make."

* Kyle Catlett, cast as T.S., first auditioned at age 7, when he could already speak 7 languages!

* author Reif Larsen is in the crowd during the speech scene!

The movie follows the novel well enough for the story to be recognizable, but the ending has been altered a bit in the film.