A Raisin In The Sun by Lorraine Hansberry | #BlackHistoryMonth This groundbreaking play starred Sidney Poitier, Claudia McNeill, Ruby Dee and Diana Sands in the Broadway production which opened in 1959. Set on Chicago's South Side, the plot revolves around the divergent dreams and conflicts within three generations of the Younger family: son Walter Lee, his wife Ruth, his sister Beneatha, his son Travis and matriarch Lena, called Mama. When her deceased husband's insurance money comes through, Mama dreams of moving to a new home and a better neighborhood in Chicago. Walter Lee, a chauffeur, has other plans, however: buying a liquor store and being his own man. Beneatha dreams of medical school. The tensions and prejudice they face form this seminal American drama. Sacrifice, trust and love among the Younger family and their heroic struggle to retain dignity in a harsh and changing world is a searing and timeless document of hope and inspiration. Winner of the NY Drama Critic's Award as Best Play of the Year, it has been hailed as a "pivotal play in the history of the American Black theatre." by Newsweek and "a milestone in the American Theatre." by Ebony.

Pulling its title from the Langston Hughes poem "A Dream Deferred", A Raisin in the Sun chronicles the lives of members of the Younger family, a black family living in Southside Chicago in the 1950s. All living together in one cramped, rundown apartment, each person in this family has their own dream of bettering their life. 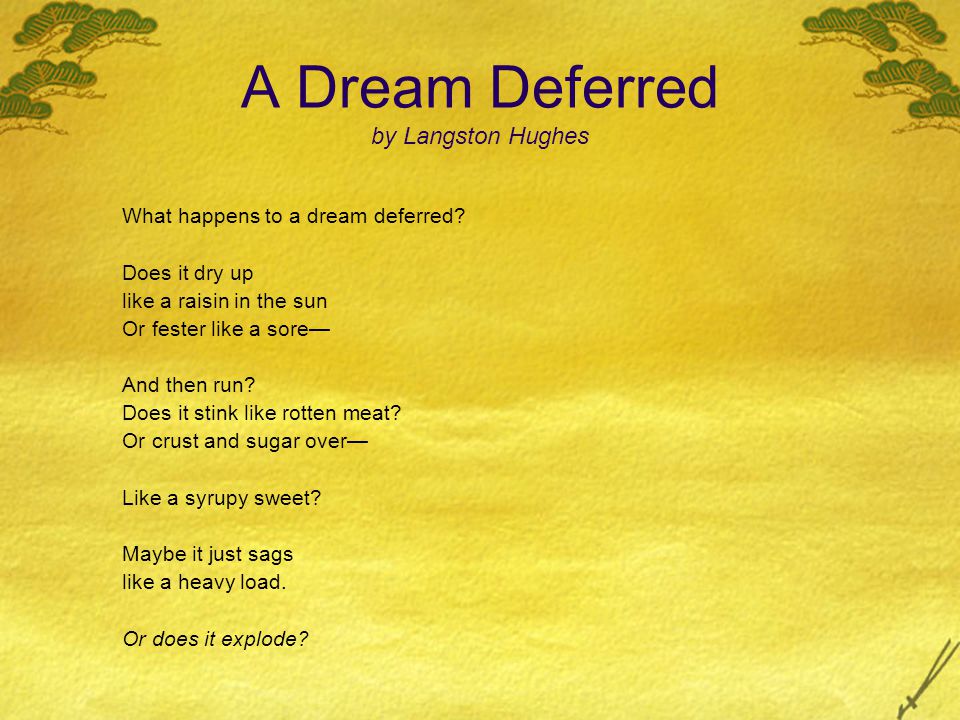 Matriarch Lena Younger, recipient of a sizable insurance check following the death of her husband, wants to buy a house out in the predominantly white suburbs and get her family out of the city altogether. Her son, Walter, urges his wife Ruth to coax his mom into giving up some of the insurance money so he can put it towards a business startup that he hopes will enable him to quit his job as a chauffeur to rich white families. Ruth knows her husband though. He's always full of dreams and schemes that never quite pan out. She'd rather just put her energy into providing the most stable environment possible for their son, Travis. Then there's Walter's younger sister, Beneatha, who also has a bit of the dreamer bug, prone to flights of fancy, but has recently set her heart on becoming a doctor.

The bulk of the play comes from the discussions that come up as each character tries to make their goals realities, and the harsh life truths that sometimes come about in the process:

* Walter doesn't really have the support of his family behind his latest get-rich-quick scheme, but he carries it out on the sly anyway, only to once again come up on disastrous results.

"Sometimes it's hard to let the future begin."

* Beneatha wants to be a doctor, hopefully somewhere where it will really make a big impact, but she also finds her heart being captured by her African friend and teacher, Joseph Asagai, even though he irritates her when he teases her about being an assimilationist because she straightens her hair.

* Lena gets the house she wants, but soon after goes up against a representative from the Claybourne Park "Welcoming Committee" as he ever so careful tries to explain to her that the neighborhood prefers "people with common backgrounds" ... aka no black folks wanted.

Originally produced for the stage in 1959, this play beautifully illustrates the universal drive, the craving for something better in life than what you currently have. Though the play focuses on an African-American family, many of the themes Hansberry incorporates transcend race differences. True, some topics mentioned are unique to African-American culture, but the beauty in this play is how in such a simple yet moving story it brings everyone in the audience together to root for the Younger folks. EVERYONE. Everyone knows the feeling of wanting to live in a better place, to wish for more respect from your boss, to have your interests and choice of educational path taken seriously, the extent of the sacrifices our parents make for us to get us to a better place, that we sometimes forget or ignore. As Lena tells her son, Walter, "I never owned, wanted or asked for nothing that wasn't for you."

Beneatha: Be on my side for once! You saw what he just did, Mama! You saw him -- down on his knees. Wasn't it you who taught me to despise any man who would do that? Doing what he's going to do?

Beneatha: Love him? There's nothing left to love.

Mama: There is always something left to love. And if you ain't learned that, you ain't learned nothing. Have you cried for that boy today? I don't mean for yourself and for the family 'cause we lost the money. I mean for him: what he been through and what it done to him. Child, when do you think is the time to love somebody the most? When they done good and made things easy for everybody? Well then, you ain't through learning --- because that ain't the time at all. It's when he's at his lowest and can't believe in hisself 'cause the world done whipped him so! When you starts measuring somebody, measure him right, child, measure him right. Make sure you done taken into account what hills and valleys he come through before he got to wherever he is.

And it's not all hardships either. Yes, this family yearns for better, but what gives this story so much of its heart is the love and warmth that exists within this clan, regardless of where they live. There's humor, hugs, a dose of tough love now and then, and a "no matter what, we got you" vibe just washing all over the Younger residence!

* In 1959, author Lorraine Hansberry was just 29 years old when she became the youngest American, first black playwright and fifth woman in history to win Best Play of the Year Award from New York Drama Critics!

*Sadly, Hansberry passed away from cancer just a few years later in 1965 at the age of 34. 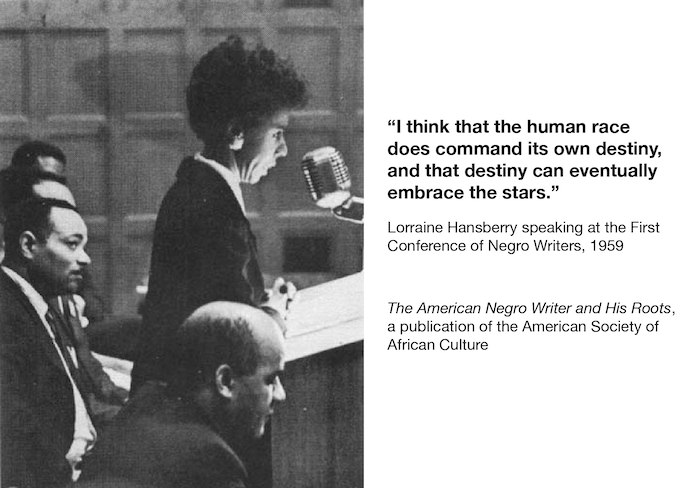 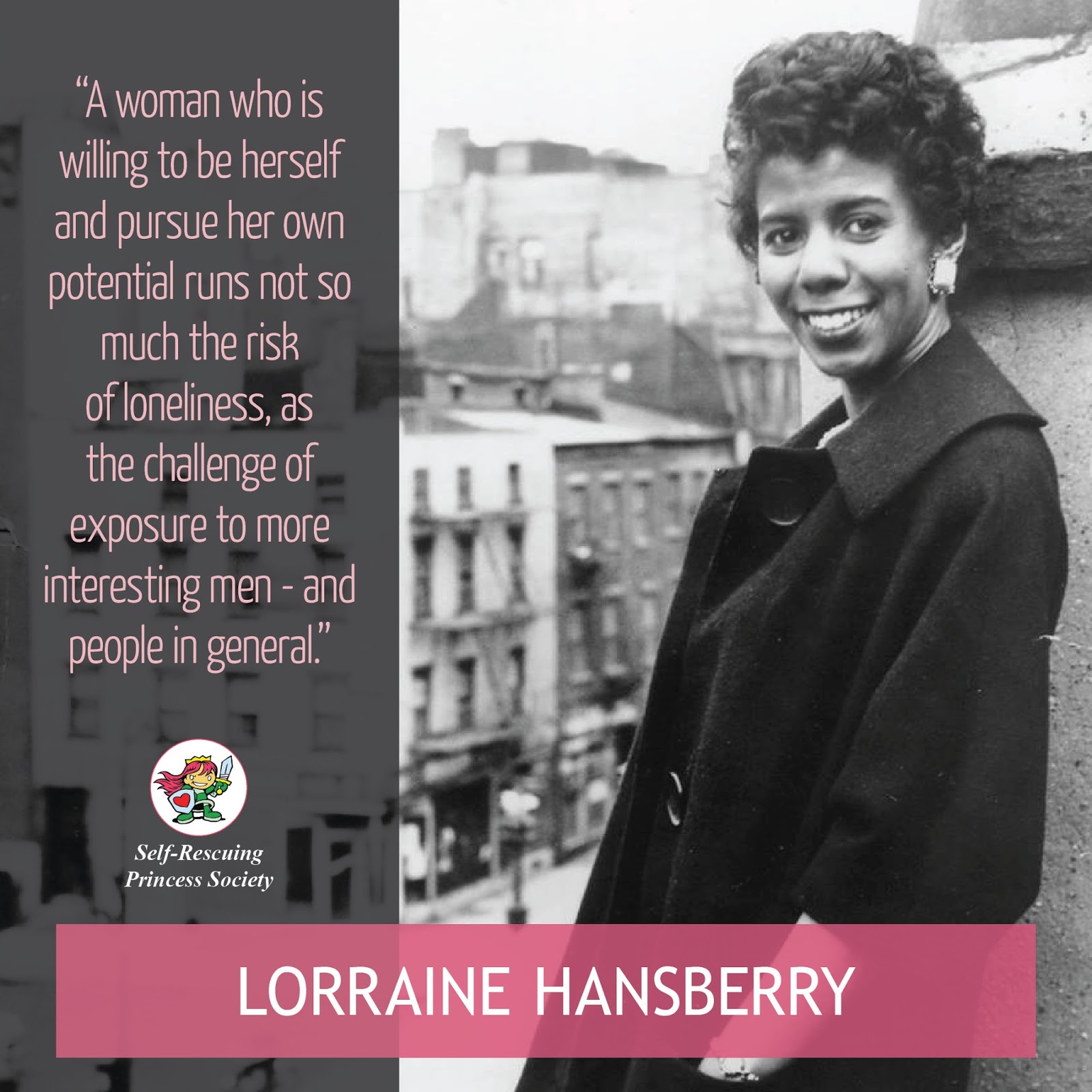