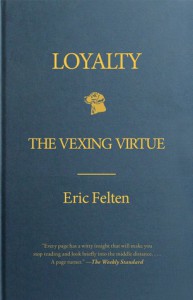 When looking for love and friendship—the things that make life worthwhile—we are looking for loyalty. Who can we count on? And who can count on us? These are the essential (and uncomfortable) questions loyalty poses. Loyalty and betrayal are the stuff of the great stories that move us: Agamemnon, Huck Finn, Brutus, Antigone, Judas. When is loyalty right, and when does the virtue become a vice? As Felten writes in his thoughtful and entertaining book, loyalty is vexing. It forces us to choose who and what counts most in our lives—from siding with one friend over another to favoring our own children over others. It forces us to confront the conflicting claims of fidelity to country, community, company, church, and even ourselves. Loyalty demands we make decisions that define who we are.

Eric Felten, a prize winning columnist for the Wall Street Journal, explores the subject of loyalty throughout the world, using as a basis various areas where this virtue is most strongly valued or illustrated:

* Examples throughout world history -- Felten puts a focus on the topic of loyalty as displayed in Greek history (Spartacus, Marcus Pacuvius) and mythology. WARNING: This book contains spoilers for the story of Pyramus & Thisbe from Ovid's Metamorphoses, Eurpides' Orestes, Sophocles' Antigone, and Aeschylus' Agamemnon.

* World Literature -- Felten pulls examples of the theme of loyalty from works of Mark Twain, George Orwell, William Shakespeare and 1001 Arabian Nights. WARNING: There are spoilers for Orwell's Animal Farm, Twain's Huck Finn, 1001 Arabian Nights, Shakespeare's King Henry V, The Caine Mutiny by Herman Wouk, and O. Henry's short story, "After 20 Years". Felten also gets into the sad story of Graham Green's youth. Now known for such classics as The Quiet American and The End of the Affair, Green's younger days were marked with heavy stress building from divided loyalties between his family (particularly his father, the headmaster of his school) and Green's school friends. The pressure got to be so much that at one point Green became convinced suicide was the only remaining answer. But as we now know, Green later overcame this dark period but actually went on to denounce the idea of loyalty altogether, at least outwardly. Elements of his work suggest that even in his later years he still saw value in the concept.

* Military / Law Enforcement -- how loyalty / codes of conduct in these environments are developed, in what ways it is important in these groups; when discussing law enforcement and more specifically prisons, gets into "prisoner dilema" and Reid Technique

Felten even looks at loyalty in regards to the entertainment industry, citing as one example the demise of the marriage between actress Sandra Bullock and motorcycle  manufacturing specialist Jesse James, after Bullock weathered a very public airing of James' adultery.

What makes it one of the most highly regarded virtues and what dangers does one face when loyalty is misplaced? Loyalty in a person is undeniably admirable, particularly when it stems from an honest place without ill intent or ulterior motive. Having people in your life who truly have your back allows one to be more brave, pursue more dreams, attempt more daring feats and ultimately develop a more fulfilling life all around. But what to do, when society places a burden on a person to be loyal to someone who does NOT seem to have the other person's interests at heart? Some will follow orders and remain loyal to the figure anyway, even when the figure's actions move beyond being merely selfish into flat out immoral or illegal. Even so, their followers can STILL get caught up in that sense of loyalty, making it difficult to convince a person to separate themselves from the unhealthy person in their life. It's just one of those things that rarely catches on, at least right away. Here enters Felten's point on how loyalty can become "the vexing virtue... creating moral conflicts".

Felten's book pleads the case as to why loyalty is still an important virtue worthy of lifelong pursuit. He writes with an enjoyable humorous tone but the text itself does not remain riveting throughout. This little book only lightly delves into the topic and even there, Felten's points sometimes become repetitive, his main stance being (as you can guess from the title) on the vexing quality of loyalty... but he hits upon the "vexing" idea A LOT.

* Here Eric Felten himself talk on the topic of loyalty in this short clip (book trailer of sorts?)