Under The Banner of Heaven by Jon Krakauer This extraordinary work of investigative journalism takes readers inside America’s isolated Mormon Fundamentalist communities, where some 40,000 people still practice polygamy. Defying both civil authorities and the Mormon establishment in Salt Lake City, the renegade leaders of these Taliban-like theocracies are zealots who answer only to God. At the core of Krakauer’s book are brothers Ron and Dan Lafferty, who insist they received a commandment from God to kill a blameless woman and her baby girl. Beginning with a meticulously researched account of this appalling double murder, Krakauer constructs a multi-layered, bone-chilling narrative of messianic delusion, polygamy, savage violence, and unyielding faith. Along the way he uncovers a shadowy offshoot of America’s fastest growing religion, and raises provocative questions about the nature of religious belief.

Under the Banner of Heaven investigates a true crime story that unfolded during the summer of 1984 within the Mormon Fundamentalist community. Brothers Ron and Dan Lafferty murdered a woman and her baby daughter, later claiming that they were ordered by God to do it.

Krakauer uses this crime case as a basis for writing a behind-the-curtain look at Mormon Fundamentalist culture -- the history, the general belief system, even the "underbelly", if you will, where one will find a growing population of people struggling with various stages of mental illness. Severe depression is on the rise in this community and suicide attempts are no longer uncommon. Also to be found are increased reports of incest, molestation, and sexual assaults. It's believed that this particular problem is because the topic of sex / sex education is so strongly repressed within the community, especially among the female population. Even married couples seem to dance around the topic when it comes to trying to openly talk about it. Krakauer even manages to incorporate the Elizabeth Smart kidnapping case, looking at the creepy, tragic details of the crime and how her abductors (Mormons who turned Fundamentalist) were able to brainwash her into submission (In interviews in recent years, Smart has since come out and implied that her brainwashing was merely an act she put on to captors as a means to stay alive).

"We have the greatest and smoothest liars in the world."

When Krakauer focuses on the Lafferty murder case, we learn that the Lafferty brothers grew up with a violent disciplinarian father, forced to watch him carry out violent acts on their mother or other children, at one point even beating the family dog to death. The father was also a believer in healing serious illness with fervent prayers rather than modern medicine. Or so Krakauer's research showed... but when Dan Lafferty himself was interviewed, he claimed he had a very happy, loving childhood. But even there, Krakauer later turns up evidence that Lafferty brought violence into his own marriage after reading a book on polygamy that claimed that women were to be looked at as "a subservient ox". It turns out Dan originally intended to take his oldest stepdaughter as his first plural wife, but later decided on a young Romanian immigrant who was working at Robert Redford's horse ranch nearby who claimed she was "open to new experiences". (Not the kind of thing people typically mean when they say that, but okay).

Brenda, the murder victim, was the sister-in-law of Ron and Dan, married to their brother Allen. She was also the only one of the Lafferty wives who was college educated. She was known in the community to be book smart with an independent spirit, not afraid to debate theology, and she would also encourage other wives in the community to stick up for themselves. Ron blamed Brenda for his own wife, Dianna, leaving him, taking their kids with her. A God-decreed murder, my foot!

In addition to the true crime investigation, readers also get a look into the general history of Mormonism, all the way back to Joseph Smith & Brigham Young days, some of which might be new or forgotten info to today's readers -- such as the fact that Joseph Smith actually ran for President of the United States in 1844, but obviously lost to James Polk.

An earnest, good-natured kid with a low boredom threshold, Joseph Junior had no intention of becoming a debt-plagued farmer like his father, toiling in the dirt year in and year out. His talents called for a much grander arena. Although he received no more than a few years of formal schooling as a boy, by all accounts he possessed a nimble mind and an astonishingly fecund imagination... Gregarious, athletic, and good-looking, he was a regular raconteur whom both men and women found immensely charming. His enthusiasm was infectious. He could sell a muzzle to a dog...

In the beginning, Joseph Smith had emphasized the importance of personal revelation for everyone... he instructed Mormons to seek direct "impressions from the Lord," which should guide them in every aspect of their lives. Quickly, however, Joseph saw a major drawback to such a policy: if God spoke directly to all Mormons, who was to say that the truths he revealed to Joseph had greater validity than contradictory truths He might reveal to somebody else? With everyone receiving revelations, the prophet stood to lose control of his followers. Joseph acted fast to resolve this dilemma by announcing in 1830 -- the same year the Mormon Church was incorporated -- that God had belatedly given him another revelation: "No one shall be appointed to receive commandments and revelations in this church excepting my servant, Joseph Smith, Jr." But the genie was already out of the bottle... People liked talking to God directly, one-on-one, without intermediaries... Thus, even after Joseph told his followers that henceforth they were forbidden to receive divine commandments concerning church doctrine, many of these Saints quietly ignored the edict and continued to heed the voice of God, whether he was talking to them about matters of theology or personal issues.

We also get more examples of Joseph Smith's raging hormones and Emma Smith's long, losing battle with trying to keep her husband monogamous. William Law, Emma's friend as well as one of Joseph's counselors, urged Joseph to cool it down a bit with the ladies, but to no avail. Their friendship was later broken when Joseph kept making passes at William's wife.

Neither Emma's tears nor her rage were enough to make Joseph monogamous...neither were the prevailing mores of the day. He kept falling rapturously in love with women not his wife. And because that rapture was so wholly consuming and felt so good, it struck him as impossible that God might possibly frown on such a thing. Joseph wasn't by nature reflective of deliberative. He conducted his life impulsively, acting according to instinct and emotion. The Lord, it seemed to him, must surely have intended man to know the love of more than one woman or He wouldn't have made the prospect so enticing.

Between 1840 and 1844 God instructed the prophet to marry some forty women. Most were shocked and revolted when Joseph revealed what the Lord had in mind for them. Several were still prepubescent girls, such as fourteen year old Helen Mar Kimball. Although she acquiesced when the prophet explained that God had commanded her to become his plural wife -- and that she would be permitted twenty-four hours to comply -- Helen later confided to a friend, "I was young, and they deceived me, by saying the salvation of our whole family depended on it."

Joseph married Helen Mar Kimball in Nauvoo in May 1843, Earlier that same month, young Lucy Walker was also wed to the prophet after being similarly coerced...When the horrified girl balked at his proposal, Joseph explained to Lucy that if she refused she would face eternal damnation. "I have no flattering words to offer," he said. "It is a command of God to you. I will give you until tomorrow to decide this matter. If you reject this message the gate will be closed forever against you."

Throughout this period of frenzied coupling, Joseph adamantly denied that he endorsed plural marriage, let alone engaged in the practice himself. "When the facts are proved, truth and innocence will prevail at last," he asserted in a speech given to the people of Nauvoo in May 1844. "What a thing it is for a man to be accused of committing adultery, and having seven wives, when I can find only one. I am the same man, innocent as I was fourteen years ago; and I can prove them all perjurers."

William decided to try his hand at making his own branch of Mormonism, the Reformed Mormon Church. He even printed pamphlets denouncing Joseph, claiming him a fraud. William's printing press was destroyed by Joseph's brother, Hyrum and an angry mob was rounded up to drive William out of town. Joseph and Hyrum had charges brought against them for their roles in the destruction of William's property. While they sat in jail, a different angry mob burst in and killed them both in a hail of gunfire. Specifically, Joseph himself was shot, sent out a window, shot again and then bayonetted, dying at a mere 38 years of age.

Sidenote: There's also a discussion in this book about the Mountain Meadow Massacre. John D. Lee was ultimately executed for his role in the murders but just prior to death was quoted as saying that if he was innocent, Brigham Young would be dead in six months. As it turns out, Young was dead five months and six days after Lee's execution, but the cause of death is presumed to be from a probable burst appendix. 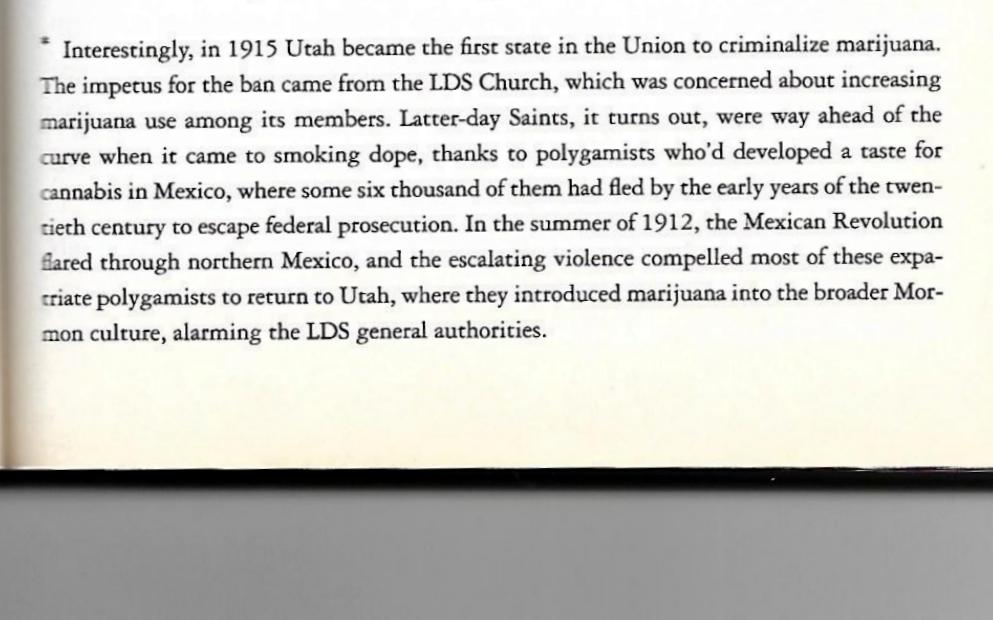 So in a nutshell, I guess Under The Banner Of Heaven is, in a way, a collective look at the history of violence that's gone down over the years within the Mormon Fundamentalist community, though largely kept quiet and swept under the "God's Work" rug. I didn't find the book completely entralling start to finish, there were some dry bits for me, but then again it definitely had plenty of jaw dropping moments in there as well. Recommended if you're at all interested in either true crime cases or reading about the more taboo side of the Mormon faith.