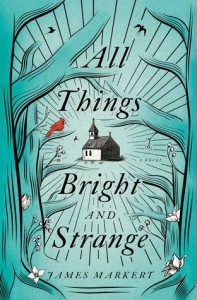 In the wake of World War I in the small, Southern town of Bellhaven, South Carolina, the town folk believe they’ve found a little slice of heaven in a mysterious chapel in the woods. But they soon realize that evil can come in the most beautiful of forms.The people of Bellhaven have always looked to Ellsworth Newberry for guidance, but after losing his wife and his future as a professional pitcher, he is moments away from testing his mortality once and for all. Until he finally takes notice of the changes in his town . . . and the cardinals that have returned. Upon the discovery of a small chapel deep in the Bellhaven woods, healing seems to fall upon the townspeople, bringing peace after several years of mourning. But as they visit the “healing floor” more frequently, the people begin to turn on one another, and the unusually tolerant town becomes anything but.The cracks between the natural and supernatural begin to widen, and tensions rise. Before the town crumbles, Ellsworth must pull himself from the brink of suicide, overcome his demons, and face the truth of who he was born to be by leading the town into the woods to face the evil threatening Bellhaven.

Post-World War I, there is a special little chapel in the woods behind the quaint town of Bellhaven, South Carolina. This chapel provides visitors with an otherworldly kind of peace and healing as well as offering the opportunity to communicate with deceased loved ones. But as people start to, shall we say "overvisit", the citizens of Bellhaven actually begin to turn on one another. The shimmer of the place starts to wear off, leading people to act out in varying degrees of animosity and violence... and it all seems to be connected to the arrival of Lou Eddington, the new owner of the previously abandoned Bellhaven plantation.

Lifelong resident Ellsworth Newberry, scouted by the Brooklyn Dodgers in his youth, once looked forward to a shot at becoming a MLB pitcher. After fighting in the war, Ellsworth returns home an amputee. Not long after, his wife, Eliza, is tragically killed in a church fire while trying to save a mother and child from the flames set by the KKK. Raphael, the little boy, survives, but his mother does not so Raphael is taken in to be raised by Eliza's best friend, Anna Belle.

Ellsworth does notice odd occurrences around town -- namely plants everywhere blooming all at once and out of season -- but he is hesitant to fall in with the chapel adoration crowd. Maybe it's his military experience, but he can't help but be guarded around that which he can't quite understand or logically explain. Such is the case with Lou Eddington. While Anna Belle finds the man nice enough, Ellsworth isn't so convinced. Will time prove Ellsworth's suspicions correct? All I'll say is that the stunt Lou pulls with the "gift"... yeah, pretty jerk maneuver in my book.

Then there's young Raphael. "No last name, just Raphael", as he explains. Ellsworth starts off having a bit of a grudge against Raphael, as Ellsworth sees the child as the reason for his wife's death. Raphael is aware of this wall, but he is determined to develop a relationship with Ellsworth. Over time, Ellsworth grudgingly begins to accept Raphael's presence and does start to converse with him, allowing for important healing conversations to begin.

Raphael continues to remind the townspeople that the chapel is "bad medicine" (thanks Raph, now I can't get Bon Jovi out of my head). With the help of Anna Belle and Raphael, Ellsworth works to push through his sometimes suicidal depression to come forth and lead his neighbors away from the "fools gold" chapel (as some dubb it), urging them to find strength in numbers so that they may fight the evil that has consumed the once peaceful town.

"Our town gathering place was burned down three years ago because of hatred. Then we got muddled up with the war and its repercussions. It's long past time now that we find a way to gather again. Our beliefs may be different. Some may not believe at all. But we have the same questions, the same needs, the same desire for good to prevail. And it's time to focus again on what brings us together instead of what could tear us apart." ~Ellsworth

Within its plot, All Things Bright and Strange incorporates historical topics such as 17th-18th century slavery, racism / race riots throughout the 1920s, and the long running fight against the hate crimes of the KKK. Portions of the story also touch upon Prohibition and labor union issues. Additionally, the book quietly interjects important topics such as the aftermath illnesses and struggles -- emotional and societal -- of war veterans (in this case, WW1 vets, but much of what is described is still very much a reality for modern day vets).

Keeping in mind that the character Ellsworth is a military veteran, be aware that portions of the story do depict some graphic violence. In fact, in terms of plot, I'd even say this novel skims the borders of the horror genre (even being published by a Christian publishing house). It's still tame compared to the darker works of Ted Dekker or Frank Peretti, but still.

Markert keeps on with his trend of crafting wonderfully unique plots with just the right touch of otherworldly, magical realism-style storytelling that stir up that sense of wonder in me and make me eagerly anticipate any new release from him.