All The Lonely People by Jess Riley WANTED: a whole new family to share holidays with. Please have a good heart and be a thoughtful, polite person. No sociopaths, no pedophiles, no fans of the Kardashians. We're not weirdos, I promise. I love old Steve Martin movies, new Steve Martin banjo tunes, Indian food, and reruns of Bob Ross painting happy little trees. So if you're looking for something other than the typical family dysfunction this Christmas, drop us a line.

After losing her beloved mother to cancer, 37-year-old Jaime Collins must confront the ugly fact that she and her siblings don't actually like one another. At all. Fueled by grief and an epic argument at Thanksgiving dinner, Jaime decides to divorce her siblings and posts an ad on Craigslist for a new family with whom to share Christmas dinner.

What happens next is a heartwarming, funny, and surprising journey to forgiveness and healing. Is blood really thicker than water? What makes a family? And how far do we have to go to find our way back home again?

Thirty-seven year old Jaime Collins recently lost her mom to cancer. Now the holiday season is just around the corner and Jaime could not be less enthused. She has no interest in holiday shopping or putting on smiles around her insensitive brother and meddlesome sister-in-law. Things come to a head when she ends up having a blow-out fight with her siblings over Thanksgiving dinner. Riding the high emotions of that night, Jaime goes home and decides to place a Craigslist ad for a new family for Christmas. She requests responses from anyone else feeling alone or fed up with their own family situation. She crafts the ad while intoxicated, posts, and within 12 hours has 26 responses to sift through. The winners for her Christmas party include transgender Chris, daschund-loving Paul, welding artist Evelyn (who also happens to have a dander allergy) and Alyssa, a science major struggling through her own grieving process after recently losing her boyfriend in a car wreck. 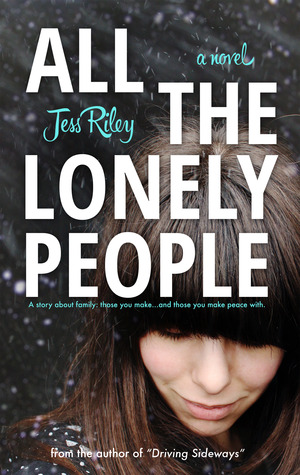 re-release cover for this book

While this story certainly has its laughs, it may not be for the more sensitive readers out there because plenty of hard-hitting topics are addressed over the course of Jaime's story. There's also a fair bit of crude language and dark / off-color / risque humor (ie. jokes about strap-ons) implemented in the process. In addition to witnessing our main character work through the grieving process over the death of her mother, we (the readers) are also informed of Jaime's father-in-law battling Alzheimer's, Jaime herself struggling with fertility issues (her journey through IVF treatments), as well as the plot also bringing up the topics of cutting, depression, attempted suicide, abusive relationships and struggles with gender identity.

That night, I sleep on the couch for the first time in years... Erik finds me downstairs in the morning, a hurt look on his face. "We never sleep apart," he says, like a wounded little boy. I tell him he was snoring, that I couldn't sleep, that I didn't want to wake him with my tossing and turning. The real reason is this: I'd simply wanted to be alone with my sadness, giving it space to spread out, because there wasn't enough room for all three of us in the queen-sized bed...Part of it was that I felt like a broken shard from a smashed vase, and I only wanted to spend time with the other broken pieces because maybe we could glue ourselves together and hold water again. Erik wasn't a broken shard. He was a whole vase, forged from some space-age unbreakable polymer. He bounced when he fell. I shattered into sharp little pieces waiting to slice into the next person unfortunate enough to walk into the room barefoot. Or as Frankie would say, I'd cut a bitch. And then feel really bad about it.

Even though I can appreciate that important topics were brought to light in the unfolding of this story, and the story itself is solidly entertaining, it did go on a little long for me. By Chapter 17 I was feeling like the story could've been sufficiently wrapped up, all questions answered... a feeling that continued on right through Chapter 26... and even after that you get three more chapters! I also didn't always love Jaime. In fact, she struck me as a being a little petty with her dad near the end of the book.

In the acknowledgements, Jess Riley gives a shout-out to author friend Jen Lancaster.