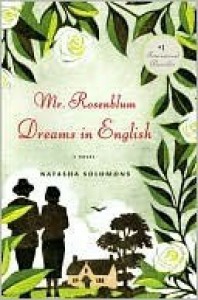 1937: Jack and Sadie Rosenblum and their one year old daughter, Elizabeth, are just one family in a crowd of Jewish refugees who emigrate to England. Jack wants to embrace British culture but runs into some roadblocks, one being that over the course of 15 years in England he never quite loses his accent. Jack ponders changing his surname to something more English, but Sadie, proud of their Jewish roots, is against the idea.

Being denied access to all the country clubs he applies to, Jack gets the idea to start his own. He becomes obsessed with perfecting all the details of the club and golf course. Meanwhile, wife Sadie suffers social ridicule as the family is deemed "crazy".

Jack also finds British humor lost on him. He tries to read Wodenhouse's Jeeves & Wooster series but it turns him off from trying any more English Lit. A strain grows between Jack and Sadie as she continues to mourn the death of her brother and the loss of her old life in Germany. She tries to cope with hobbies like gardening and baking, but it's pretty much just an emotional Band-Aid.

There were blips of interest for me within the plot, moments of humor or a powerful line here and there but largely it struck me as a lot more dry and "meh" than I was expecting. That said though, something about this story made me think that with the right director and screenwriter, this could be translated into a fun little film.