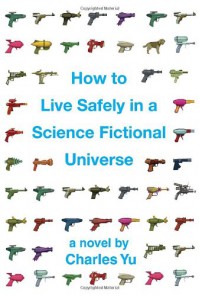 With only TAMMY - a slightly tearful computer with self-esteem issues - a software boss called Phil - Microsoft Middle Manager 3.0 - and an imaginary dog called Ed for company, fixing time machines is a lonely business and Charles Yu is stuck in a rut. He's spent the better part of a decade navel-gazing, spying on 39 different versions of himself in alternate universes (and discovered that 35 of them are total jerks). And he's kind of fallen in love with TAMMY, which is bad because she doesn't have a module for that. With all that's on his mind, perhaps it's no surprise that when he meets his future self, he shoots him in the stomach. And that's a beginner's mistake for a time machine repairman. Now he's stuck in a time loop, going in circles forever. All he has, wrapped in brown paper, is the book his future self was trying to press into his hands. It's called How to Live Safely in a Science Fictional Universe. And he's the author. And somewhere inside it is the information that could save him.

Author Charles Yu writes himself in as the protagonist of his novel here, presenting himself as a fictional Yu working as a time traveling technician on Minor Universe 31, his job primarily being to repair heavily used time traveling machines.

In this universe, (fictional) Yu's father invented time travel, but has been missing for quite some time. Yu's mother is locked into a one hour time loop -- that is, she can only live one precise hour of her entire life over and over again -- where she basically just makes dinner repeatedly. Ugh, can you imagine the horror of that?!

Chronological living is kind of a lie. That's why I don't do it anymore. Existence doesn't have more meaning in one direction than it does in any other. Completing the days of your life in strict calendar order can feel forced. Arbitrary. Especially after you've seen what I've seen. Most people I know live their lives moving in a constant forward direction, the whole time looking backward.

Yu decides he wants to try to find his father. With the help of a book written by his future self and TAMMY, an operating system with incredibly low self esteem, he sets out on a space journey of mind-bending proportions through the space-time continuum. He uses time travel to move through memories and alternate scenarios looking for clues to his father's current whereabouts. The journey takes quite a complicated turn when Yu accidentally shoots his future self and has to dive into the closest time loop to try to escape the situation from escalating any further. But ooooh the mess this makes of things!

It can sometimes get confusing keeping it all straight: In the early parts of the story, when fictional Charles is in and around his hometown, he lives and works out of his vehicle, the TM-31, but here's where it gets really wild. Minor Universe 31 is a world made of all the things we know of from science FICTION, but fictional Charles can travel in and out of areas throughout the universe that work in REAL time, such as Earth. When it comes to the US, in fictional Charles' world, ages ago Los Angeles and New York merged so now the States as a whole are basically considered one gigantic city! In this world, US citizens now live across the land in boroughs with names like Capital City, Lost City, Verse City, and New Tokyo ("old" Tokyo broke off from its original position, floated away until it attached to the landmass of the States).

Established science fiction readers will likely have a fun time geeking out to all the Star Wars references and the plot reminiscent of a Douglas Adams novel. Even some similarities to Jasper Fforde's Thursday Next series can be found here. But if you're entirely new to the genre, this book could prove to be a befuddling place to start your sci-fi journey.

I was never totally sure why everyone wanted to be Han Solo. Maybe it was because he wasn't born into it, like Luke, with the birthright and the natural talent for The Force and the premade story. Solo had to make his own story. He was a freelance protagonist, a relatively ordinary guy who got to the major leagues by being quick with a gun and a joke. He was, basically, a hero because he was funny. Whatever the reason, first place was always Solo, always, always, always, and second place was usually Chewbacca, because if you weren't the one saving the galaxy, you might as well be eight feet tall and covered with hair.

Portions of the story moved beyond clever into slightly irritating ramblings, especially the metaphysical points that continued for pages and pages before we are able to get back to the story. Module Y -- this novel is broken up into "modules" rather than "parts" -- felt like it went on FOREVER.

The humor was undeniably enjoyable, but when it came to TAMMY's (the operating system) depression, I had hoped for a little more humor worked in there... she did have minor jokes here and there but a lot of her end of the story brought the whole madcap-ish tone of the novel down a bit for me. For this point, I refer back to the master, Douglas Adams, on how to incorporate heavy themes in a more light-hearted way. As a whole, the story is a fun, sometimes head-scratching, "wait, what did I just read?" ride. While I think I preferred the first half of the story over the second, I did really like the epilogue entitled "Appendix A". 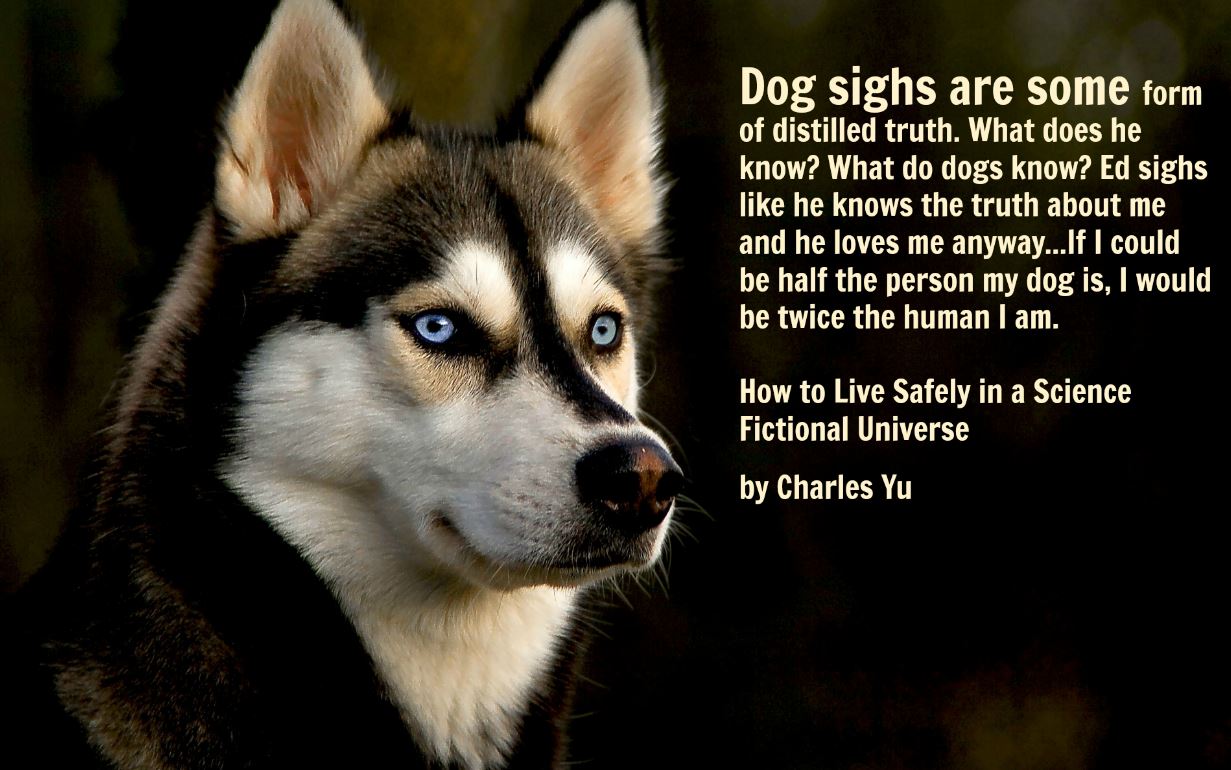 * How To Live Safely In A Science Fictional Universe is Charles Yu's debut novel and was partly inspired by Yu's reading of The Fabric Of Reality by David Deutsch.

* Charles Yu has been awarded the National Book Foundation's 5 under 35 Award and the Sherwood Anderson Fiction Award for his short story collections.

* In the acknowledgements of this book, Yu gives a nod to his wife, saying, "Thank you for being the best version of yourself, even when I'm my worst." ♥