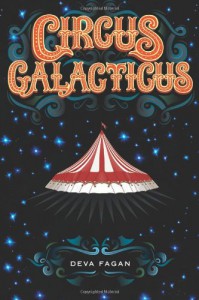 Trix can deal with being an orphan charity case at a snotty boarding school. She can hold her own when everyone else tells her not to dream big dreams. She can even fight back against the mysterious stranger in a silver mask who tries to steal the meteorite her parents trusted her to protect. But her life is about to change forever. The Circus Galacticus has come to town, bringing acts to amaze, delight, and terrify. And now the dazzling but enigmatic young Ringmaster has offered Trix the chance to be a part of it. Soon Trix discovers an entire universe full of deadly enemies and potential friends, not to mention space leeches, ancient alien artifacts, and exploding chocolate desserts. And she just might unravel the secrets of her own past if she can survive long enough.

Taiwanese-American teen Beatrix "Trix" Ling is an orphan who is sent to Bleeker Academy, a boarding school, as a charity case. Trix is struggling to find her place not only at Bleeker but just in the world at large. Conflicts with school bullies (as in, her trying to defend herself) lead her into a heap of disciplinary action scenarios with the school admin.

When the Circus Galacticus comes to town and the ringmaster (conveniently known just as Ringmaster) offers her the chance to join the crew, it seems like a nice little escape from her social hell. That is, until she comes to find out that she's just signed onto an intergalactic circus. That's right, this roadshow hits up the whole galaxy and then some!

"Please, let me go. I won't cause any trouble."

"I find that hard to believe," says the Ringmaster, casting aside his lighthearted humor with such absolute saddness it catches the breath in my chest. "You've been causing trouble all your life, haven't you? Asking questions that weren't in the textbooks. Saying things other people were afraid to say. There was always something off about you, something different, something that made other people stare and whisper and maybe even laugh.. Isn't that right?" His eyes pull on mine, demanding an answer.

Trix comes to find that her new gig surprisingly holds answers to the mysteries of her own origin story. What's the deal with the meteorite her parents left her, this hunk of rock that came with enigmatic instructions to guard it with her life?

I was six years old the first time I really saw the stars. They hung sharp as broken glass in the desert sky. I jumped, trying to reach them -- they looked so close. I begged my dad to hoist me up on his shoulders, but even he wasn't tall enough. God, I can still feel that ache. I'd never wanted anything that bad.

Dad smiled and tried to make me laugh away my tears. But Mom understood. She held me so tight I can almost feel her arms, even now, nine years later. I think she was crying too. You'll reach them someday, Beatrix, she said. I promise. Then she spun me around until my head swam with stars. That's all I have left of my folks now.

Trix also gets caught up in intergalactic politics --  the battle between the MANDATE and the TINKERS, the Mandate being those in power who determines rules and regulations for the whole universe. They want to keep status quo through strict order and conformity. Meanwhile, Tinkers are those on the outskirts, the social outcasts who advocate for diversity, culture full of color and variety of all kinds, artistic expression, all that is beautiful and wild in life. Nyl, one of the main characters from Team Mandate, likes to argue his stance that there are dire consequences that come with allowing people to have differences within society: wars, religious persecution, crime, etc.

The battle between these two groups began generations ago. In what is now a post-war era, though the intensity of the battle has lessened some, the descendants from both sides of the original war still quietly fume. The reign of the Mandate has been replaced with the Core Governance. Different name, same desire for conformity. But Core Governance maintains that they don't support either faction (Mandate or Tinkers), their main goal is just to establish and maintain laws for the betterment of society in general. Very PC of them!

A note for teachers or homeschooling parents: the whole plot conflict regarding the divisive beliefs of the Mandate vs. the Tinkers serves as nice social commentary for today's world problems. The way author Deva Fagan handles these hot button ideas is admirable, not overly in the reader's face or preachy, just simply entertaining examples to get discussions going among middle-grade readers. Something else for educators to note, there are a few instances of very mild cursing within this story.

"Another fabulous word: BRUNCH. Not quite one thing or the other, but sometimes it's exactly what you need..."

I watch in alarm and fascination as he piles a mountain of avocado and beans onto a chip, all while balancing the book atop his baton, defying both gravity and common sense. Maybe that's his superpower. That and the ability to wear a bazillion sequins without looking like an ass.

Attentive readers may also notice the subtle ways Fagan recreates Trix's Earth problems throughout various points of her space travels. Just one example: the school bully Della and the prickly Headmistress Primwell vs the ship bully Sirra and the prickly ship instructor Miss 3. This gives readers some food for thought -- not only can you not escape your problems by running away, but also, think on the importance of learning to adapt to life's obstacles. You have to work on your own personal growth, not wait for others to change.

This is a perfect read for lovers of middle grade fiction, Star Trek adventures, Dr. Who humor, and Firefly, as there are elements of all of that in here! In fact, Nola, the mechanic on the Big Top ship very much reminded me of Kaylee, the mechanic from Firefly.