The Facts Speak For Themselves by Brock Cole 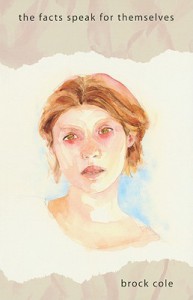 This is the story of how thirteen year old Linda came to be involved in the murder of one man and the suicide of another. The police and her social worker think they know the answer, but they've got it wrong. Here Linda tells her own story. She sees her world and what has happened to her with compelling clarity. Her voice is direct, cool, and ruthlessly honest. She'll persuade you that she is neither victim nor fool  -- that the facts speak for themselves.

~ from inside dust jacket (hardcover edition)

Thirteen year old Linda is brought in on suspicion involvement with the deaths of two men, (one a murder, one a suicide). The story is told from Linda's perspective -- via conversations with police detectives and social workers -- but her version of events and the tone it is presented in set her up as a possibly unreliable narrator.

If you're a fan of the tv program The First 48, this story has a somewhat similar feel to that. In a nutshell, Linda witnesses a scuffle between Jack Green, a co-worker of Linda's mother, and Frank Perry. Just hours later, both are dead. At first, Linda gives the impression that she is merely an innocent witness to the events, but how does she explain arriving at the police station with blood all over her clothes and under her fingernails?

Linda's personality proves to be a blend of complexity, oddness and a certain degree of unlikeablity. Even though she throws out some weird thoughts here and there, it's hard not to feel for Linda. She grows up in a home where her mother has a rotating door of boyfriends and baby-daddies (Linda's father having died when she was a baby), the house full of kids her mother largely neglects. Linda takes up the care of her younger brothers but later struggles with depression after suffering sexual abuse at the hands of her mom's boyfriend of the moment.

A small ray of hope gets infused into this bleak story when, by some strange stroke of luck, Linda's mother actually gets involved with a decent guy! A bit older than the mother's usual picks, but he proves to be a solid father-figure type in Linda's life, at least compared to what she's previously had to pick from! From this man, Linda gets lessons in money, specifically stocks & investments -- knowledge that will prove most useful in her future. But is her time with him as innocent as it first seems?

The setup of this novel, as far as the short chapters and conversation style make for a quick read. That, and the whole thing is under 200 pages. Brock Cole's writing style is engaging enough to keep one reading... I was just hoping for MORE. The plot description had potential but something about it as a whole fell a bit flat for me. There also wasn't enough meat to the writing to create much of a take-away factor for me in the end, as far as a moral message, thought-provoking social commentary, etc. NOTE: if you are a sensitive reader, this story deals with dark themes and some of the language does get rather sexually graphic. Also maybe worth noting for some readers: Cole chose not to use quotations marks. That's right, quotation marks: NONE. Something to be aware of if that is a personal peeve for you as a reader.

YA Crime Mystery books with some edge drama sad stories