Snow-Storm In August by Jefferson Morley 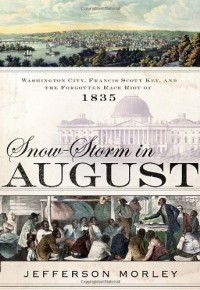 On the night of August 4th, Arthur Bowen, an eighteen-year-old slave, stumbled into the bedroom where his owner, Anna Thornton, slept. He had an ax in the crook of his arm. An alarm was raised, and he ran away. Word of the incident spread rapidly, and within days, Washington's first race riot exploded, as whites fearing a slave rebellion attacked the property of the free blacks. Residents dubbed the event the “Snow-Storm," in reference to the central role of Beverly Snow, a flamboyant former slave turned successful restaurateur, who became the target of the mob's rage. In the wake of the riot came two sensational criminal trials that gripped the city. Prosecuting both cases was none other than Francis Scott Key, a politically ambitious attorney famous for writing the lyrics to “The Star-Spangled Banner,” who few now remember served as the city's district attorney for eight years. Key defended slavery until the twilight's last gleaming, and pandered to racial fears by seeking capital punishment for Arthur Bowen. But in a surprise twist his prosecution was thwarted by Arthur's ostensible victim, Anna Thornton, a respected socialite who sought the help of President Andrew Jackson. Ranging beyond the familiar confines of the White House and the Capitol, Snow-Storm in August delivers readers into an unknown chapter of American history with a textured and absorbing account of the racial secrets and contradictions that coursed beneath the freewheeling capital of a rising world power.

The synopsis gives you the gist of the "snow-storm" portion of this book, the largely forgotten 1835 race riot in Washington D.C., primarily between white lawmakers / defenders and former slaves, a key (if unintended) player being the bi-racial (male) chef & restaurateur Beverly Snow. Snow not only suffers attacks on his business but also has his home vandalized and the safety of his family threatened.

That story alone would be powerful enough but Morley's work here -- an expansion on his 2005 Washington Post article -- offers readers so much more. We also get an education in the early development stages of our nation's capital, then known simply as Washington City. Morley also gets into the topic of colonization and which of D.C.'s bigwigs were on what side. You might be surprised to learn how it pans out!

Some of my takeaways from this book:

RE: DEVELOPMENT OF WASHINGTON D.C.:

* Where to set up shop for the nation's capital? Hmmm. Well, the U.S. had racked up a mountain of debt after the War of Independence. Secretary of Treasury Alexander Hamilton wanted to set up the capital in Pennsylvania but Secretary of State Thomas Jefferson countered, saying he had a debt plan but Southern members of Congress would never go for it unless Congress' Northerners agreed to set up the capital in a more southern region. Pennsylvania was also largely anti-slavery, had a strong Quaker (recognized abolitionists) population. Jefferson recommended putting the capital along Virginia-Maryland territory, where there were good banking options and slavery was still legal. Hamilton appeared to have no objection.

* The design for D.C. was modeled after Paris -- the canals, boulevards, stately buildings -- so much so that George Washington even hired French engineer Pierre L'Enfant to oversee the project. Prior to this Parisian design, author Charles Dickens had had a visit to the city and likened it to a wild, western frontier town. Morley adds, " 'The whole affair,' said another visitor, ' looked as if some giant had scattered a box of his child's toys at random on the ground.'

* D.C.'s Capitol Bldg was designed by William Thornton, a slaveholder who pushed for colonization. In one story in this book, Thornton came to the aid of the battered wife of a French diplomat, proclaiming, "I know the laws of humanity and I mean to uphold them." Thornton was also rumored to be the father of Arthur Bowen, son of Maria, house servant to Anna Thornton (William's wife).

Personally, I was left with mixed feelings on Thornton. Morley describes him as having "a thirst for liberty but a weak will", creative dreamer type, high ideals, distracted easily but highly personable... but he also seemed to lack much of a backbone, often going with majority rule.

* The Commonwealth of Virginia had an 1806 law on the books that basically said that freed slaves must leave the state within a year or they could be apprehended and sold back into slavery, only being allowed to stay within the Commonwealth area past that first year IF they could get a signed endorsement from a white citizen, petitioning the state legislature to allow the freed person in question to stay.

* By the 1830s, colonization had become quite the divisive topic around Washington. Colonization was the suggested idea that freed slaves could be sent back to Africa to set up a new colony of freed people. There were supporters for this idea in both white and black communities. White racists saw it as a way to get rid of those they deemed second-class citizens, while some black communities saw it as an ideal opportunity to distance themselves from said racists and slaveholders who seemed determined to make free life miserable for them. But colonization was sort of an all or nothing proposition... the intent was that if some went, everyone had to go... and some, as in the case with Beverly Snow, had a perfectly good life in DC that they didn't want to give up. There was quite a large group of supporters for the idea though, including some of Snow's white friends!

* By the 1830s, Washington D.C. had developed a solid horse racing community. Even President Andrew Jackson was said to make a big show of placing bets (though it seems his luck wasn't so good lol). Beverly Snow first developed clientele in the city as a street vendor outside racing arenas. After developing some success on that front, he went on to open an oyster house, becoming the first restaurateur to offer fine dining experiences in D.C. Pity that a cholera outbreak in 1832 ended up wiping out nearly 500 citizens, putting a bit of a dent in his business! But he hangs in there, and once the first restaurant does well, he moves on to open a second, even more upscale establishment.

* Snow was pretty innovative for his time when it came to the restaurant business! He became well known for his turtle soup, which he would offer only periodically, advertising that the soup was "restorative"... see? promo-ing health benefits, whether they're proven or not! By the way, consider yourself warned here, vegans/ vegetarians: Morley includes a play-by-play of how this turtle soup was prepared.

AND THEN THERE'S THE WHOLE FRANCIS SCOTT KEY BIT

* Famously penned the poem that would later turn into the U.S. national anthem... many years after it was set to the music of a drinking song we stole from our British cousins ;-) The popularity of that poem turned out to be a much needed reputation restorer for Key after an embarrassing display of turn-tail-and-run during the War of 1812. Key had the poem published in papers, later got the idea to set it to music. Also, weirdly, barely mentioned any of this to his wife but thoroughly discussed with his brother-in-law, Roger Taney. Taney was a racist lawyer famous for the Dred Scott case as well as his backing of a South Carolina law allowing black seamen to be arrested once they stepped off their in-port ships.

* Supporter of colonization and, it seems, not quite so anti-slavery as you might have been taught in school. Key had a public persona for being an ally for black citizens, periodically defending them in court (at least at the beginning of his legal career), but his actions in his off-time suggested opposite leanings.

* Key, who served as D.C. district attorney for 8 years, was called in as prosecuting attorney for both the Snow case and that of Arthur Bowen, (see Thornton sect. above). Bowen was said to have been found in the bedroom of Anna Thornton one night, holding an ax over her head as she slept. Arthur's mother was also in the room (asleep) at the time, once awakened was able to usher Arthur out of the room, tried to get him out of the house but police had already been summoned. Key sought capital punishment for Bowen.

> Anna Thornton tried to fight for Arthur's freedom. For his protection, she tried to get him resold before his trial date but everyone she appealed to declined to help her. Anna went directly to Key, even requested a meeting with President Jackson himself, after writing him an 18 page letter (which she got in a carriage, rode to WH and hand delivered herself!) pleading Arthur's case, this letter including a petition sheet full of signatures from others also begging for the man's freedom. Bombarded with all this, Jackson eventually instructed Key to go along with the request.

>Two days after Arthur's arrest, abolitionist Reuben Crandall was arrested for being suspected of distributing anti-slavery periodicals / pamphlets (Good laugh over the bit that discusses Key's own words being turned on him during this trial!). A white mob developed shortly after and since they couldn't get to Crandall, they went after Beverly Snow (after a rumor got around that Snow was liberally tossing around "coarse or derogatory remarks" regarding white women of Washington. Snow's professional successes combined with his perceived cockiness had already made him the enemy of many white men in town.

> Snow escaped harm to himself but the mob did trash his home & establishment, though they were instructed not to break any of the furniture, as Snow had it on loan from a white man.

Though it does take a bit of time (approx. 120 pages) to get into the bulk of the race riot topic, the "snow-storm" as it's termed, the history here is fascinating. BTW, also mentioned in this book: the bungled / thwarted assassination attempt on Andrew Jackson.

It doesn't leave you with the most glowing image of some of our country's most notable names in history, but it is history that is vitally important to be aware of just the same. Morley also includes an inset of pages featuring photographs, paintings, and news articles of the period showcasing some of the key players in this unsavory bit of history.