The Year Of Magical Thinking by Joan Didion 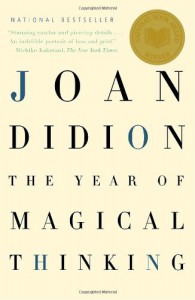 Several days before Christmas 2003, John Gregory Dunne and Joan Didion saw their only daughter, Quintana, fall ill with what seemed at first flu, then pneumonia, then complete septic shock. She was put into an induced coma and placed on life support. Days later–the night before New Year's Eve–the Dunnes were just sitting down to dinner after visiting the hospital when John Gregory Dunne suffered a massive and fatal coronary. In a second, this close, symbiotic partnership of forty years was over. Four weeks later, their daughter pulled through. Two months after that, arriving at LAX, she collapsed and underwent six hours of brain surgery at UCLA Medical Center to relieve a massive hematoma. This powerful book is Didion's attempt to make sense of the "weeks and then months that cut loose any fixed idea I ever had about death, about illness . . . about marriage and children and memory . . . about the shallowness of sanity, about life itself."

In the year 2003, Joan Didion and husband, novelist John Gregory Dunne, receive word that their daughter, Quintana, has been rushed to the ICU (on Christmas Day, no less). Quitana had been battling a severe case of pneumonia when her condition had suddenly turned septic. Just a few days later, December 30th, Dunne and Didion are settling into their dinner meal when Dunne suffers a massive, fatal coronary right at the dinner table.

By October 2004, Joan Didion decides to start journaling some of her thoughts since experiencing all this pain and loss, this journal being the seed that would eventually become this book, The Year Of Magical Thinking. Here, Didion thinks on moments over the course of her forty year marriage to Dunne. Moments where she now, in retrospect, believes there were warning signs of the grief that was to come. As far back as 1987, she recalls, Dunne had expressed fears of premature death. By 2003, what would end up being the year of his death, Dunne had developed a long history of heart trouble, even having a pacemaker installed. Numerous times that year he had said he felt sure he was dying, but Didion admits she dismissed these moments as him just having momentary bouts of depression.

Like most people trying to cope with the sudden loss of a loved one, Didion struggles to navigate through feelings of guilt, that sense that you could have done something more to save them. She even toys with the idea that she can still reverse the outcome of the events. But hey, don't judge. It's wild what grief can do to an otherwise seemingly sane mind.

Didion also shares her feelings on being a mother having to witness her child suffering in illness and feeling helpless to fix it. While Didion's passages regarding her husband read strangely distanced in tone to me, it was these moments where she talks on Quintana that touched me much more. How awful that must have been for her to witness her daughter pull through brutal pneumonia and septic shock only to improve a bit before suffering a hematoma, pretty much putting the poor girl's health struggle back at square one!

This book didn't land quite as perfectly for me as it did for a lot of other readers. That could be, in part at least, to the fact that I often don't do well with books -- either fiction or non -- that are written in a stream of consciousness style. As I mentioned earlier with some of the passages that speak on Didion's husband, the writing, at times, had a distanced feel to me. I acknowledge that grief can often bring on a certain sense of numbness and detachment from the world, but from time to time, this just read a little too arm's length to me, alternately reminding me of either a police report snapshot of events or perhaps a college paper being written on the theme of melancholy.

But that's not to say I got nothing from this book. There were definitely passages that resonated with me, maybe moreso in that I read this the same year I lost my mother. That said, I am a little confused as to where the "magical thinking" comes in? Well written, no doubt, but it struck me as just a general sort of grief memoir rather than the life-changing work so many have touted it to be.

* There are a few spoilers for other books to be aware of in this book: namely her husband's novels DUTCH SHEA, JR. and NOTHING LOST, but also the play ALCESTIS and the film ROBIN & MARIAN starring Audrey Hepburn and Sean Connery.