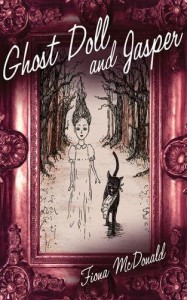 What happens when a broken doll is touched by stardust? She becomes a ghost doll, of course! The newly awakened Ghost Doll and her companion Jasper, a mangy black cat, set off in search of a safe place to live. But the city is new and dangerous territory for Ghost Doll (who fell asleep in quieter times). The noise and rush of traffic terrifies her, and as for the new style of toy—complete with computer chip and battery—she can’t think of anything worse. But there is something far more sinister and dangerous lurking in the city. Someone else witnessed the falling star and is anxious to get a hold of the fragment—and Ghost Doll—for his own evil purposes. How will Ghost Doll and Jasper escape their hunter and find a home where they both are safe and loved?

A speck of stardust falls from the sky, eventually coming to fall on a doll's head in an abandoned house, bringing her to life as "Ghost Doll". Ghost Doll is startled by all the loud noises she's now experiencing and mystified by modern toy dolls she meets who are filled with batteries and computer chips. Ghost Doll, along with her new friend, Jasper (a mangy black street cat), sets out across the city in search of a safe, quiet place she can call home.

A safe home becomes even more of an urgency for Ghost Doll when it is revealed shortly after her metamorphosis that scientist / inventor Dr. Borsch witnessed where the stardust fell. He becomes consumed with this need to obtain the stardust for his experiments, so when he discovers it lies within Ghost Doll, he and his henchmen set out to capture her.

I found the illustrations (also done by McDonald) to have something of a 1990s avant-garde flair to them. Made me a bit nostalgic for old newspaper comics I remember loving as a kid :-) Some of the drawings were pretty cute, others were a little TOO squiggle-heavy, making them hard to decipher.

The plot itself was at times sweet, other times moving (especially when we get to know some of Ghost Doll's history as she starts to have memories of a little girl she belonged to once). I also really liked Jasper, who didn't seem physically tough but he was strong where it was important, in his soul. But in general, something about the story fell just a bit flat. I enjoyed the adventure while I was there, but I was sort of a passive passenger, not feeling a strong pull to return to this one in the future.