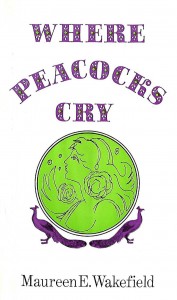 To Jancey, seventeen and brought up in the isolated surroundings of the Fisherman's Rest, the storm which brought Dion Challen to the modest inn to seek shelter was a handmaiden of Fate, a messenger of Romance and a purveyor of dreams come true. So she eagerly accepted the marriage he offered, not realizing that Dion found in her less an ideal bride than the reincarnation of a beloved sister now dead.

~ from inside dust jacket

Jancey Grant is seventeen and working at her family's B & B, The Fisherman's Inn. One night, a violent storm drives Dion Challen and his cousin, Mark, to the door of The Fisherman's Inn, seeking shelter while on a road trip. While they hoped to be back on the road the next day, Mother Nature had other plans. With the roads blocked from the nearby river flooding, Dion and Mark hunker down and wait things out. It is during this waiting period that Dion and Jancey have a surprise whirlwind romance that leads up to Dion proposing marriage. Jancey, naive Jancey, assumes it couldn't anything but honest, passionate love that spurs Dion to do this, but the reader is let in on his creepier inspiration. It turns out Jancey strongly resembles Dion's deceased sister!

Prior to the wedding, cousin Mark does try to dissuade the two from going through with it, as he knows Dion's motives are superficial and weird and Mark, though he doesn't know her all that well at this point, feels compelled to protect young Jancey. But his pleas fall on deaf ears all around and Jancey officially becomes the new mistress of Challen's End, the ancestral estate of Dion's family.

While everything is bathed in a rosy newlywed glow for the first few weeks, it's not long before Dion's peccadilloes   -- lying, manipulating, drinking too much, "chasing skirts" -- start to rear up and make periodic appearances. At first, Jancey has all the excuses in the world to dismiss her husband's behavior but after awhile even she reaches her limit and turns to Mark (in friendship) for support. When they first met at the inn, Jancey, consumed with attraction to Dion, convinced herself that she mostly disliked Mark. After a year's time, she can't imagine what gave her that idea, as she realizes she actually feels more at ease around him than Dion! Jancey, now over a year wed, is floored at the realization that she swore undying love and fidelity to a man that had actually only managed to provide her with a few moments of peace and contentment! So where does she go from here? What does she do for the rest of her life in the pursuit of happiness?

I first discovered this book years ago at one of those Friends of the Library sales where you buy up discards for super cheap. Intrigued by the premise (and sold on the 10 cent price tag at the sale), I decided to give it a shot. I read it and for some reason, all these years I've had this memory of absolutely loving it so it's stayed on my shelves. Well, here recently I decided to pick it up again to see if it still held up in my mind and for the life of me I can't remember what about this story I was so in love with.

Don't get me wrong. It's definitely not terrible, it's just SUPER safe. What I mean is that there is something here plot-wise that wants to scream REBECCA by Daphne Du Maurier so badly ... and there's the slightest flavoring of that, but it just never quite gets there. Jancey is cringingly naive, and Dion ... bland as a rice cake, really, not sure what Jancey got so caught up in, other than maybe it was a result of being semi-isolated at the inn and little to no exposure to hot guys near her age means dang near anything starts to look promising after awhile? Mark is the obviously more attractive choice right from the get-go but for reasons not all that well illustrated, Jancey is just not feelin' him.

It seemed like Wakefield tried to get a creepy vibe in with Dion making multiple references to Jancey's uncanny resemblance to his sister (maybe ol' Maureen had a little Poe on the brain, because for a minute there it seemed like she might go with a dash of House of Usher) ... but not much more is ever really done with that and the focus from then on stays on Dion being a weasel of a guy. The upside is Jancey does find her girl-power backbone in this whole process.

That's why I say it's a cutesy, safe, almost-mystery. It was originally published in the 1970s and it definitely has the feel in the writing style. Fun for a re-visit but now ... nope, no longer on my keeper shelf.