Caden Bosch is on a ship that's headed for the deepest point on Earth: Challenger Deep, the southern part of the Marianas Trench.
Caden Bosch is a brilliant high school student whose friends are starting to notice his odd behavior.
Caden Bosch is designated the ship's artist in residence to document the journey with images.
Caden Bosch pretends to join the school track team but spends his days walking for miles, absorbed by the thoughts in his head.
Caden Bosch is split between his allegiance to the captain and the allure of mutiny.
Caden Bosch is torn.

Challenger Deep is a deeply powerful and personal novel from one of today's most admired writers for teens. Laurie Halse Anderson, award-winning author of Speak, calls Challenger Deep "a brilliant journey across the dark sea of the mind; frightening, sensitive, and powerful. Simply extraordinary."

POTENTIAL TRIGGER WARNING: This novel does periodically bring up the topic of suicide.

The outside world sees Caden Bosch as a regular high school student. In his own mind however, Caden sees himself as artist in residence aboard a submarine assigned to explore Challenger Deep, the deepest part of the Marianas Trench, the deepest section of ocean in the world. What most would consider his real life, that of a HS student, to him is more like a secondary dreamworld. Pay attention and you will see subtle, parallel characters and situations between life aboard the ship and Caden's time in school.

Forget solar energy -- if you could harness denial, it would power the world for generations.

There are others, fellow crew members on the ship, around Caden's age. Most of these teens come from broken or troubled homes. As for the ship's captain -- who has apparently has a preference for speaking like a pirate -- well, there is something dark and mysterious about him.

Regardless of what world he was in, for me there was one constant about Caden: those elements within his personal story which insisted on keeping my heart just a little bit broken for him all the way through the story. When people try to reach out to him, Caden tends to verbally push them away but deep inside he mourns not having a good enough understanding of what's wrong well enough to let others help. He struggles with his parents' questionable behavior, to say the least. In one instance, they get drunk and pressure him to bungee jump. There was a part of the story, about at the halfway point of the book, where Caden's parents make a decision they think will help him and his inner struggles but for me, it felt that a little more explanation was needed, as far as where the dual realities come into play.

Everything feels right in the world... and the sad thing is that I know it's a dream. I know it must soon end, and when it does I will be thrust awake into a place where either I'm broken, or the world is broken.

Over time, Caden develops near-crippling anxiety, but tries out for his HS track team in an attempt to stay connected with schoolmates. There are some laughs when it comes to Caden's therapy sessions... well, if you've been in therapy yourself, that is. It's relatable humor: "I tell him that everything sucks, and he apologizes for it, but does nothing to make things less suckful."

I also loved Shusterman's use of analogies. One of my favorites was a car one, and its likeness to therapy: "useless check engine light... but only, the people qualified to check under the hood can't get the damn thing open."

Caden does struggle with suicidal thoughts at times, but he says the existence of his little sister is a "fail safe" from actually going through with anything. Even so, he still ponders the subject near the end of the novel, so heads up if you are sensitive to that sort of theme / material. I'm happy to report that while much of the plot is heavy in tone, Shusterman does close things on positive, empowering thoughts. He also provides two pages of resources after the novel to help any reader struggling with depression, anxiety, suicidal thoughts, all of the above, etc.

The artwork you'll find in this book was all done by Shusterman's son, Brendan, who suffers from chronic depression himself. Brendan's own story of struggle, along with his artwork, inspired the adventures and trials Caden of Challenger Deep experiences. 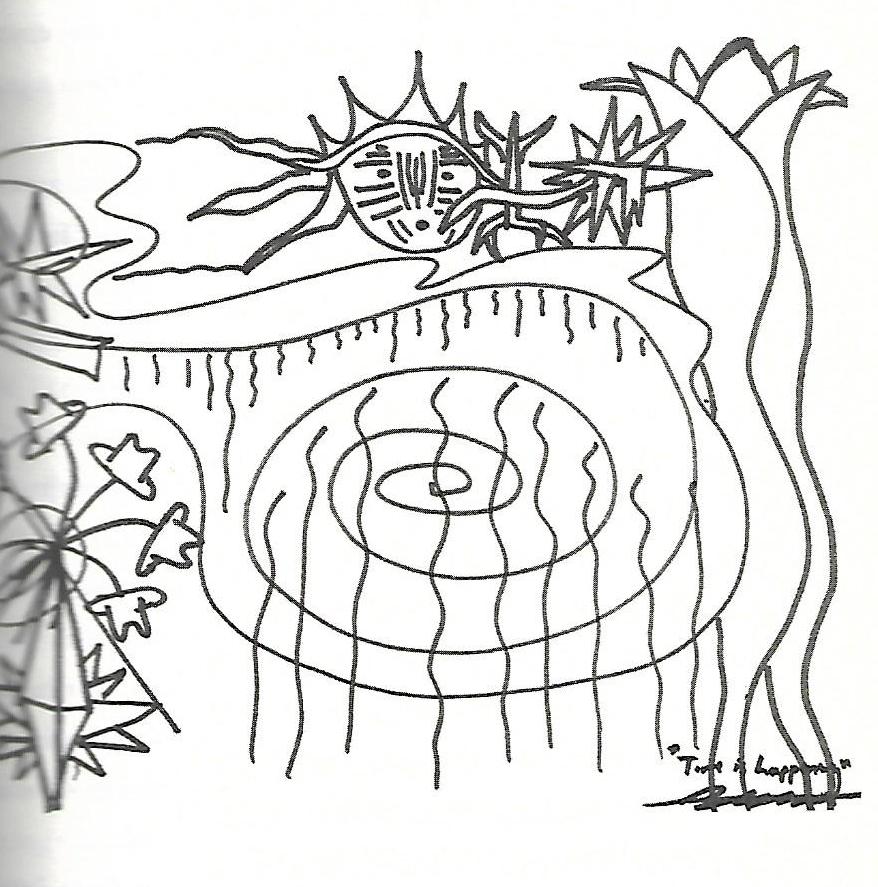 My initial interest in picking this book up was spurred by rave reviews from so many friends and fellow reviewers saying "This is the most accurate depiction of mental illness I have ever read." I've lived with mental illness my entire life. My mother battled depression, my father agorophobia and bipolar disorder. Both my brother and I were diagnosed with chronic depression, anxiety and PTSD in our adulthoods. So I figured I was going into this on pretty firm ground. While on one hand I could see what Shusterman was trying to convey, the novel didn't always represent my own experiences. But at times it hit it spot on. Then, other times I was admittedly kinda bored outta my gourd. But that's the thing about mental illness, there's no one clear-cut way to have it. Everyone's battle is different. So I took that into consideration when weighing my end thoughts on my reading experience.

While I would not put my vote in with the "best ever" crowd, I do vote that it has its merits when it comes to the subject of mental illness.