Can You See Anything Now? by Katherine James 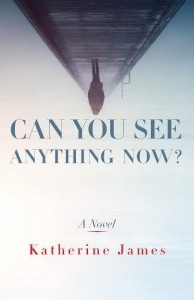 Follow a year in the small town of Trinity where tragedy and humility reveal true motivation and desire. This raw and unsentimental story exposes the complicated ways that interwoven lives affect each other for good and for bad. There is the suicidal painter, Margie, who teaches her evangelical neighbor, Etta, how to paint nudes; Margie's husband, the town therapist, who suspects his work helps no one, and their college age daughter, Noel, whose roommate, Pixie, joins them at home for a winter holiday, only to fall into Trinity's freezing river.

TRIGGER WARNING: This novel, from the very first sentence onward, addresses themes of suicide and self-harm.

There's one interesting mix of folks living in the small town of Trinity! The focus of this novel is mainly on Margie, an artist who has been struggling with various forms of physical and mental illness for much of her life. Most recently, her doctor has dropped a diagnosis of multiple sclerosis. Struggling to get a grip on her dark moods, Margie introduces herself to the reader in the opening scene of Can You See Anything Now? via a suicide attempt. Though she's nearly successful in her attempt, due to some unexpected details of the moment, Margie is given a second chance at life.

Within these opening chapters, there was something that struck me as very Sylvia Plath about Margie, what with the struggles with the emotionally distant husband and all. Perhaps that is what author Katherine James meant to convey, as the likeness between Margie and Sylvia Plath IS actually brought up as the reader nears the final chapters of the book. Margie mentions to a friend that her husband treats her like Sylvia Plath, a moment where, had I been there in person, I would've likely pointed and yelled a "haha! I knew it!" The rice box scene was particularly telling:

She struggled with the box of rice. "The side of the box says to push and pull up to open but it's not working." She scratched at what looked like a perforated part of the cardboard.

Nick said, "I don't read the directions, I just open the box."

He took the box from her and pressed the perforated tab in with his thumb  and handed it back to her.

She turned back to the stove. "You force things and then they break."

Though still deeply depressed much of the time, Margie makes an honest effort to find the good in each day. Quite the feat, as the reader comes to learn that Margie is married to a therapist disillusioned with his work and quietly grumbly over how his life has turned out, though he outwardly tries to put a good face on things for show. Margie gives the impression that she and her husband, Nick, were quite happy and in love for many years but over time something ever so subtly shifted. Though there is still love there, the kind that comes with having been with someone for a good chunk of one's lifetime, perhaps these two are not IN love these days? Because there is a noticeable difference, one that is more easily defined after many years of life together, between having a general, overall autopilot kind of love for someone versus still having the hearts aflutter IN LOVE quality to one's union. Margie's source of happiness and strength these days seems to largely stem from her bond with daughter Noel... but even there Margie fears a loosening of the child-mother ties.

Hurting in her own heart, living with a dissatisfied spouse, these two empty-nesters struggling to stay emotionally connected with their now college-age daughter, Noel... your heart just breaks for this woman silently but fervently grasping for a lifeline of light and joy. But the important thing is she's trying. A common theme that runs through the stories of all the characters actually, that determination to make a daily effort to try, even when the path seems obscured, even impossible to traverse. Margie tries to keep things exciting and positive within her marriage, she tries to build a friendship with neighbor Etta, even if it feels awkward at first, she tries to talk with her daughter, even if she's not sure she's saying the things Noel needs to hear.

There was an equation for everything. The scattered physical pain and the pall of her mind that were constantly tugging her out of alignment could sometimes feel like proof that she was responsible. Certain illnesses reek of a sovereign retribution, even though she wasn't even sure she believed in God.

Margie's neighbor, Etta, is another character who gets a good chunk of the novel's focus. Etta is also an artist, albeit one who has developed a following largely through her paintings of tomatoes. Just tomatoes. But Etta wants to branch out, maybe start doing some paintings of rooftops. She feels there's something magical about the way light touches rooftops that she'd like to capture. Connecting with Margie, one artist to another, Etta is pushed to explore her artistic side in ways she's never considered before. While Etta has her own struggles with depression and general dissatisfaction, her method of coping is to just push aside any and all negative thought. Instead, she challenges herself to be the very best wife, friend, bible study group member.... whatever life asks of her, she will give her all. Etta powers through the darker days with relentless optimism: visiting with the sad or lonely, cheering a down in the dumps neighbor with her homemade baked goods, whatever will turn the world's frowns upside down.

This novel is definitely one that begs to be taken slow and honestly contemplated. Thinking over my reading experience after that last page, the book in its entirety was not solid gold for me, but man, it was close. There were some points where certain conversations felt a bit filler-ish. There were also multiple points within the last 100 pages or so where I thought to myself "oh, this would make for a great dramatic close right here," but the story would continue on.. and on... perhaps to its detriment.

But given time to think on the novel's topics days after completing the book, there's so much good here...  good in the "hard truths" sense, a kind of tough love way of storytelling ... that can really benefit those brave enough to face it. This is not a book for the reader who always and only ever wants the happy ending with rainbows and gumdrops. This is for the reader who has been run through the gauntlets of life and wants literary representation for it. The characters of the town of Trinity illustrate the person who cries out for the desire to truly be seen, the need and hope one has for loved ones to somehow innately sense your silent struggle and TRULY understand your pain when you can't find the words to ask for help yourself... impossible as that can be at times, you can't help but want it anyway.

Through their individual life paths, each character within this novel, in their own way and time, discovers the incredible release that comes with a good ugly cry when you've been trying to be strong for so long, as well as the lesson that oftentimes the best way to heal or at least diminish the pain in your own heart is to help others work through their moments of suffering.

"Wisdom was knowing how stupid you are."

Though this novel technically falls under Christian Fiction, purists of the genre may struggle with the grittier themes of this story. Can You See Anything Now? touches upon mature content themes such as cursing, premarital sex, drug abuse, suicide, and self harm.  While possibly hard to stomach, these elements do play an important role in the emotional struggle and overall development of the characters. Still, readers should be aware of what they are getting into, particularly if the reader is highly sensitive to such themes. One scene involving the character who struggles with self harm is rather memorably graphic as it describes the actual process and damage on the body of the character.

That being said, if you are a big fan of the topic of love languages, that topic as well has a recurring role within the characters' conversations.

FTC Disclaimer:  Paraclete Press kindly provided me with a complimentary copy of this book in exchange for an honest review. The opinions above are entirely my own.

* The song "Brave" by Riley Pearce kept running through my mind as I read this novel. Just offering that if you like extra musical sensory experiences with your reading :-)