After The Cheering Stops (memoir) by Cyndy Feasel 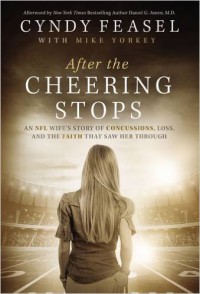 Former NFL wife Cyndy Feasel tells the tragic story of her family’s journey into chaos and darkness resulting from the damage her husband suffered due to football-related concussions and head trauma—and the faith that saved her.

Grant Feasel spent ten years in the NFL, playing 117 games as a center and a long snapper mostly for the Seattle Seahawks. The skull-battering, jaw-shaking collisions he absorbed during those years ultimately destroyed his marriage and fractured his family. Grant died on July 15, 2012, at the age of 52, the victim of alcohol abuse and a degenerative brain disease known as chronic traumatic encephalopathy, or CTE.

Cyndy Feasel watched their life together become a living hell as alcohol became Grant’s medication for a disease rooted in the scores of concussions he suffered on the football field. Helmet-to-helmet collisions opened the door to CTE and transformed him from a sunny, strong, and loving man into a dark shadow of his former self. In this raw and emotional memoir that takes a closer look at the destruction wrought by a game millions love, Cyndy describes in painful and excruciating detail what can happen to an NFL player and his family when the stadium empties and the lights go down.

Grant Feasel was a 6' 7" lineman for the Seattle Seahawks throughout the 1980s-early 1990s, playing center and long snapper positions. In this memoir, Grant's ex-wife, Cyndy Feasel, recounts all the years of football trauma she witnessed her husband take and how deeply that affected him and their family up until the day he died.

Cyndy and Grant met while students at Abilene Christian College, where Grant played on the school's football team while studying to be a dentist. Even in those early days, Cyndy would attend his games, watching him get hit or knocked flat out at nearly every game. But coaches would simply wave some smelling salts under his nose and send him back onto the field. Things didn't get any easier when the NFL came calling in 1984. After being offered a position with the Baltimore Colts (who became the Indianapolis Colts shortly after Feasel signed on), Feasel jumped at the opportunity, figuring he could take up his medical degree again later on if the football gig didn't work out. He only got to play for them a short time before the coaches decided he was one of the expendables on the roster. Much to his relief, he was quickly picked up by the Minnesota Vikings.

Minnesota was where I heard, for the first time, Grant saying things like "I got my bell rung" after a game or "I suffered a stinger" in practice. His body took a lot more abuse and I noticed that he was staying longer after practice to get iced and sit in whirlpool baths...Muscles were bruised, and ligaments were stretched and sometimes torn.

Keep in mind that Grant played much of his career on unforgiving artificial surfaces that were like patio carpet rolled onto a concrete slab. The first generation of artificial turf wasn't very sophisticated and lacked the "give" of a traditional dirt-and-grass playing field or today's softer FieldTurf...Grant often complained of "stingers" on Sunday nights. A stinger was an injury to a nerve in the upper arm, either at the neck or shoulder. A stinging or burning pain spread from his neck to one of his hands and felt like an electric shock down the arm. Many times I heard him say, "My neck is on fire."

I'm sure he was hurting. He'd always say to me, "I can barely turn my head," and I believed him every time I watched him drive and switch lanes; his neck barely swiveled.

During the 1985 Vikings training camp, Grant suffered a major collision with a teammate from the defensive line. That hit caused Grant's left knee to have a major blowout -- his ACL, MCL and meniscus all shredded, immediately bumping him to the team's IR (injured reserve) roster. That is, until around Thanksgiving 1986, when he was dropped yet again. But again, luck was on his side -- the Seattle Seahawks snatched him up for their 1987 season and he stayed with them until his retirement in the early 1990s. The Seahawks coaches were aware of his injury record but were also impressed by his formidable size, his hard-working blue collar mentality and his high intelligence that allowed him to quickly and easily learn plays. By this time, Grant and Cyndy had children to support. Fearing that he could lose his spot on the team and thus his income, Grant dedicated himself to finding any means to bulk up, hoping it would prevent or at least soften further injury... even if that meant turning to steroid usage.

The detrimental hits didn't stop though, no matter what measures Feasel chased. Instead, the norm became him being sent home with first one baggie full of prescription grade pain killers, then multiple baggies. He also turned to his own remedies, mainly a Sunday & Monday night ritual of downing an entire 6 pack of Coors Light with a Vicodin chaser. As Grant approached his last years in the NFL and then retirement, Cyndy saw the gentle, hard-working family man she fell in love with transition into a man of barely bottled rage. Grant's moods spiraled into a dangerous blend of anger, paranoia, and uncharacteristic profane behavior / language. Though he would seek the help of psychiatrists, more often than not he'd simply be sent home with yet more prescriptions for pain killers or mood enhancers / suppressants. In time, Cyndy discovered her husband's secret: abuse of prescription medications. An alarmed and terrified Cyndy watched her once happy marriage descend into a living nightmare of emotional (and later, physical) abuse.

Though Grant's official cause of death was listed as ESLD or End Stage Liver Disease (aka cirrhosis of the liver), Cyndy lays out why she believes her husband essentially committed suicide slowly over the course of nearly 20 years, thanks to his then-undiagnosed CTE (Chronic Traumatic Encephalopathy) disease. Grant's brain was donated for study to the "Brain Bank" at Boston University, where the brain matter of numerous deceased NFL players have been sent to be tested for CTE. To date, CTE is a condition that can only be determined postmortem (after death).

CTE can only be tested for postmortem, when scientists study the brain's tissues for a buildup of an abnormal protein known as tau, which was becoming associated with memory loss, confusion, impaired judgement, impulse control problems, aggression, depression and progressive dementia...concussions and "dings" on the football field that aren't allowed to heal thoroughly activate the tau protein, which then moves throughout healthy brain cells. When the frontal lobe -- the seat of socialization, emotional intelligence, and rational thinking -- become affected, the brain deteriorates over time. Memory loss and confusion become more prevalent.

Having recently read the non-fiction work League of Denial, which takes a lengthy look at the topic of the NFL and the CTE epidemic in general, I thoroughly appreciated the opportunity to read Cyndy Feasel's personal account of trying to live with someone who battled the condition (though they weren't aware of it at the time). Reading the two works together really cemented in my mind the truth that though the NFL has made progress in better caring for their players, the scourge of CTE is still very much a topic that requires persistent discussion. Near the end of Cyndy Feasel's book, there is a definite lean towards pushing parents to keep their kids away from team sports. While I understand the stance, I personally find it a drastic one.

While I am sympathetic of Cyndy's struggles, I was a little put off by how watered down and somewhat bland the writing is here. Though the story is Cyndy's, the writing is actually done by Mike Yorkey. His author blurb gives him credit for writing or co-writing some 100 books to date. Why then was the writing so simplistic? That's what stumped me. For example, did the reader really need an explanation of what Advil is... seriously?! I was also surprised that while Feasel talks of immersively educating herself on the topic of CTE after Grant's death, I didn't see one mention of Dr. Bennett Omalu, though he was instrumental in the discovery of the disease in the first place! (Will Smith portrayed Omalu in the film Concussion).

Again, I would recommend checking out League of Denial for an in-depth look at the topic of CTE, but I appreciate Feasel's memoir as a personalized, supplemental offering on the subject.

FTC Disclaimer: BookLookBloggers & Thomas Nelson Publishers kindly provided me with a complimentary copy of this book & requested that I check it out and share my thoughts. The opinions above are entirely my own.