You Carried Me (memoir) by Melissa Ohden 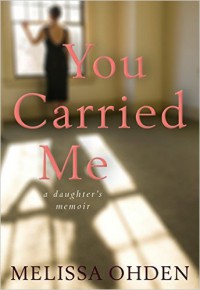 Melissa Ohden is fourteen when she learns she is the survivor of a botched abortion. In this intimate memoir she details for the first time her search for her biological parents, and her own journey from anger and shame to faith and empowerment. After a decade-long search Melissa finally locates her birth father and writes to extend forgiveness, only to learn soon thereafter that he has died―without answering her burning questions. Then her birth mother’s parents say they are unable to pass along Melissa’s letter. Years later, when she finally hears from the woman who carried her and gave her life, she finds out why. But the shocking truth is more than she can bear. Yet even the most startling family secrets are eclipsed by the triumphant moment when Melissa becomes a mother herself in the very hospital where she was aborted. And she reveals how―through the miscarriage of her only son, the birth of a second daughter with complex health issues, and her own birth mother’s story―she gained a deep empathy for every woman who has had an abortion. Like none other, this intensely personal story of love and redemption cuts through the debates surrounding a divisive contemporary issue to touch our common humanity.

In this certainly unique memoir, author Melissa Ohden tells the story of how she came to be... the kind of story one just doesn't hear every day! In 1977, Ohden's teenage mother became pregnant with her. An appointment for an abortion procedure is made, the appointment is kept, but the procedure itself doesn't really go as planned. Against all odds, after 5 DAYS worth of being pumped full of toxic saline solution Baby Melissa (or Katie Rose as the nurses called her, Melissa was the name her adoptive parents ending up choosing) survives. She is born prematurely, weighing in at just two pounds. After one nurse hears a faint noise coming from the child, a flurry of nurses rush to save her life.

{Sidenote: Ohden explains how the saline is made toxic for a fetus in her book -- she notes that a standard abortion procedure from start to finish is typically completed within 48 hours so that gives you an idea of just how much extra solution her little body had to take, making her story all the more miraculous.}

Once the newborn is deemed stable, the search for prospective adoptive parents begins. Doesn't take long for a suitable and interested couple to be found but the decision is made to keep Melissa at the hospital until her weight is at least five pounds. When the time comes, Melissa's new parents take her to a farm 100 miles away from where she was born. There she is raised in a loving, nurturing environment out in the farmlands of Iowa. At the age of seven, when her adoptive parents welcome a biological son, it sets off the first sparks of curiosity in Melissa about her own biological parents. But her search for the truth doesn't really begin until a few short years later when during a fight with her sister (also adopted), her sister makes the remark, "At least my mom wanted me." When Melissa presses for an explanation, she's simply told to ask their adoptive mother.

Having avoiding talking much about the day of Melissa's birth previously, her adoptive mother comes clean and lays out all the details. Melissa then launches into what will be a decade long search for any information about her birth family. In that time, Ohden battles depression, anorexia, bulimia, as well as a bout of teenage alcoholism and promiscuity, mostly with older men in town. She explains that with the sensation of everything else in her life feeling as if it were running completely off the rails, the eating disorders, drinking and sexual exploration -- though admittedly unhealthy and dangerous -- did seem to be one aspect she could control.

Bulimia, alcohol, sex -- these were my unholy trinity of coping mechanisms. They dulled, but didn’t deaden, my torment. That all this suffering was hidden from everyone who knew me seemed to be the point -- I was singularly chosen for misery; I was different, broken, unworthy. Alone.

As Melissa embarked on her college journey, she started seeing more and more eerie ties between her own life choices thus far and the little bit she had been able to learn about her birth mother. First off, the college she chooses to attend: shortly after she starts classes, Melissa discovers her school is the very same her birth mother attended (and her maternal grandmother taught at as well!) -- what are the odds, considering she was raised 100 miles away and could've just as easily chosen a school closer to home! The link ends up being too much for her. That, combined with other stressors -- a large part of that being her constantly being silenced whenever she tries to share her abortion-birth story, being shushed part way in or being called a liar later on -- pushes Melissa to make the choice to drop out and re-enroll in courses closer to her hometown. Her college experiences (after the school switch) lead her to take up social work, mostly with domestic violence support groups. A second powerful tie to her birth mother comes during Melissa's own experiences with pregnancy. Ohden has her first delivery in the very same hospital where her mother tried to have her aborted! After having a stillborn son and a daughter with developmental disabilities, Ohden's search for her birth mother begins to feel all the more important. She needs to hear her mother's story, needs to know the why of it all and attempt to make sense of her traumatic origins once and for all.

Melissa's story is a powerful one, no question there. In all honesty though, while I found this book incredibly moving and well-written from start to finish, I struggled with the second half (approx). I will say here and now my issues with this book are for the most part tied up in the fact that Ohden and I do not see entirely eye to eye on the topic of abortion. While this book did help me to understand why she feels the way she feels -- and I can respect her views -- I struggle to put a full stamp of agreement on her opinions. About halfway through this book, it went from being a memoir on her personal journey to a full-on, hardcore pro-life soapbox fest. I myself am very pro-choice but never try to shut down pro-lifers who want their voice heard. I'll hear them out... I think we're on the same page... up to a point.

Here's my thing: I say I am pro-choice because while I could never see myself choosing abortion, I can't speak on the life situations of anyone but myself. I figure the people who choose that path could very well have quite valid reasons for deciding that's the way for them. Ohden here goes on a pretty hard attack of Planned Parenthood. She talks of how she went once for a general check up because they offered services she would've otherwise struggled to afford. But there were abortion protestors out and about one day as she was leaving who got her thinking. She then seemed to feel dirty being anywhere near a PP office. In fact, later on in the book she states that one of the biggest honors of her life was being asked to testify on Capitol Hill in a hearing to consider ending federal funding for Planned Parenthood programs. Again, my stance: I figure there will always be a least a small number of women who will feel the need to choose abortion. If so, at least PP is there to have it done in a clinical setting with medically trained staff, rather than some back alley sitch. Furthermore, so many people these days act like PP is ONLY for abortions when, in fact, I myself have gotten literally life-saving help from the doctors at my local office back when I was too poor to go anywhere else. It was at a PP office that a serious medical condition was found within my heart that is now being regulated... thanks to a PP doctor. So it bugs me when protestors want to so quickly say everything about PP should be shut down.

It's not just the PP story. Throughout the whole second half of the book she keeps bringing up instances where she continues to almost vilify anyone who does chooses "the evil of abortion" as she repeatedly describes it. Near the very end of her story though, she does admit that being the mother of a special needs child did teach her to have more empathy towards those who feel the need to choose abortion (so she says). Being a woman who is unable to have children myself, I also cringed at lines like (describing her first experiences with motherhood), "We were no longer JUST a couple, we were a family." I truly struggle with books that perpetuate this idea that without children a woman's existence is not complete. It just brings out the involuntary eye roll in me.

So that's it. That's why I'm torn. I struggle with my own personal beliefs clashing with Ohden's. Enough to where it makes me uncomfortable as the reader, enough to where I may even feel her views are naive or misguided at times (hey, I'm allowed to have my opinions too -- I AM a blogger after all), but not so much that I shut my ears / mind off to her. In fact, I quite enjoyed hearing her story. As I said, the writing style is impressive, the flow is nice, and while I might not always be on same page with her, I do think she handles a tricky subject with impressive grace, bringing a conversational tone to a topic that very much needs regular discussion. I was even surprised to learn that Ohden and I share a very similar recurring nightmare -- Wild!

I'd recommend this read for anyone interested in the topics of medical education (specifically abortion, obviously), feminism, women's health, women's issues or adoption stories. Differing beliefs or opinions aside, there's always an education to be had in hearing someone else's story.

FTC Disclaimer: Handlebar (Plough) Publishing kindly provided me with a complimentary copy of this book with a request that I might check it out and share my thoughts. The opinions above are entirely my own.