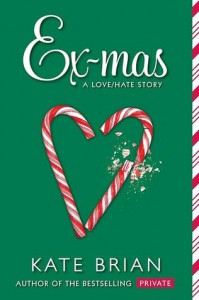 Seventeen-year-old Lila Beckwith's parents just left for vacation, and Lila's all set to throw the holiday party of the season. But when her Christmas-obsessed little brother, Cooper, discovers that global warming is melting the North Pole, he and his best friend, Tyler, take off on a runaway mission to save Santa. Lila has to get Cooper safely home before her parents get back on Christmas Eve. But the only person who can help her is Tyler's older brother, Beau  a.k.a. Lila's musician, anti-everything ex-boyfriend. It'll take more than a Christmas miracle for Lila and Beau to overcome their differences and find their fugitive brothers. But could a journey destined for disaster help these polar opposites fall in love...all over again?

Seventeen year old Lila Beckwith's parents are taking off on a trip for part of the holiday season. Lila will be left home to house-sit as well as care for her eight year old brother, Cooper. She has plans for a blow-out party waiting in the wings but those plans are shot down when her brother decides to get little-brother petty and rat out her secret. To get back at him, Lila "accidentally" leaves out an article she got from her Earth Science class that hypothesizes how global warming might spell trouble for Santa this year. Lila knows her little brother still believes in Santa so she figures the article will hurt him a bit, but she has no clue just how far lil' Coop is about to take things!

Cooper, under the guise of hanging out at his best friend Tyler's house, manages to sneak out from the watch of his sister and board a train with Tyler (who just happens to be the little brother of Beau, Lila's grunge-lovin' ex-boyfriend that she currently has rather acidic feelings toward). Cooper and Tyler have a plan to travel to the North Pole to help Santa fight global warming and keep Christmas on track. So with two boys under the age of ten on the loose on the California railway system, Lila and Beau will have to set differences aside and round up their brothers before wind of the impromptu roadtrip gets back to their respective parents. Over the course of days that they find themselves on the road trying to catch up with their brothers' train schedules, Lila & Beau get to talking and discover that maybe they've always understood each other better than they realized and maybe just maybe there's a chance wrongs can be made right just in time for a magical, romantic-in-the-most-unlikely-of-ways Christmas.

Beau swung back out through the door of the little store, and Lila watched him walk toward her. He had a way of walking like the world owed him something, and he wasn't afraid to hold out for it no matter what. It was a laid-back yet prickly saunter.

This is the first of Kate Brian's works I've tried, though I've heard of her Private series. Given the premise and the cutesy cover, it might be easy to initially dismiss this one as an easy breezy forgettable holiday fluff piece {confession: at least that's about as high as MY expectations going in were...}. While this is most definitely holiday fluff, it's of the best sort, in my book! You have your share of warm & fuzzy feels here, but I also like that it's balanced with families that aren't necessarily Christmas card perfect -- the tree might be up but these guys still argue, get stressed out, annoyed with each other... I can respect that realness!

I think having Beau and Lila start the story at a point where they can barely make eye contact they're so disgusted with each other was a good move as far as plot goes. The reader doesn't immediately have insta-love dumped on them from the first chapter and the build up of the "get a room already" kind of bickering was really well done, I thought. Beau and Lila start off each having their own way of exuding somewhat shallow or judgmental tendencies, but I'm impressed that for such a short story, author Kate Brian found a way to have them both go through emotional growth that seemed to unfold at a reasonable pace.

There was also a fun personal connection for me (being a born & raised Cali girl) having these characters be put on a roadtrip up the coast of California as I got to vicariously re-experience sights I grew up knowing so well but have been away from for quite some time.

If you're looking for that fun & breezy Christmas read that's not SO sweet it'll feel like chugging a carton of nog, I'd definitely recommend giving this one a try. Coming from someone who has always considered Christmas her favorite holiday, I still say we need all the comic relief we can get this time of year and this one pulled some solid smiles out of me :-)