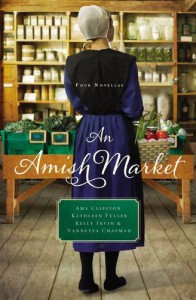 An Amish Market is an omnibus of four Amish-themed novellas, each centered around happenings within a general store or farmer's market-type setting.

A quick run down of the stories within:

Love Birds by Amy Clipston -- Ellie Lapp and her mother are mourning the sudden death of Ellie's brother Seth (work accident). With no other immediate family (Ellie's father having died years ago), Seth's close friend Lloyd helps the Lapp women with chores around their family farm. Lloyd and Ellie begin to see their friendship deepening to something more. Ellie is awed by Seth's wood carvings of birds and gets the idea to sell them in the shop where she works part-time, but Seth is very much hesitant to sell his work. That is until it dawns of him that his work may truly help someone in need.

A Bid For Love by Kathleen Fuller -- Hannah Lynne sells homemade butter at the local farmer's market. Ezra stops by every week and buys a brick of it, keeping secret the fact that back home he has quite the stockpile of these bricks because he can't seem to get the courage to do much more talking with Hannah beyond store counter niceties. His chance comes though when at a local charity auction Hannah sees a quilt she clearly desperately wants, a quilt donated by Ezra's mother. When Hannah's bid doesn't win the quilt, Ezra comes to the rescue, buys back the quilt from the winning bidder, and gives the quilt to Hannah. She can't, in good conscience, just take the quilt after she hears what he paid to get it for her so she agrees to pay him back through sweat equity, helping him fix up an old house he recently bought. Seeing her bring her feminine touch to his home, Ezra feels quite the pull to convince Hannah to stay by his side for good.

Sweeter Than Honey by Kelly Irvin -- While doing some shopping one day, Isabella formally meets store owner Will Glick when she accidentally breaks a glass jar of pickled beets, instantly staining Glick's shop floor. Isabella is embarrassed but also admittedly curious to get to know Glick -- resident confirmed bachelor -- better. She soon learns that Will's guarded demeanor stems largely from a former soured romance that has since made him uneasy around any other women. But what girl doesn't like a good challenge, right? :-) Isabella hopes a patient and gentle approach to befriending Will can help him open up and see that one bad experience doesn't have to mar one's entire life.

She was right to be offended. He'd painted her with the flaws of another. A bad habit when it came to women he hardly knew.

Love In Store by Vanetta Chapman

There's an unidentified prankster running around the grounds of the Old Amish Mill Complex, a property consisting of nearly 40 buildings -- including but not limited to an ice house, market, cafe, theater, school house and gift shop -- celebrating and teaching about Amish life and history. The pranks start out harmless enough, but as they intensify to the point of seriously potentially injuring guests to the complex, employees David (a widower) and Stella (a 50 year old spinster) team up to try to solve the mystery. And, of course, given the title of this one, a flirtation between the two develops in the process.

My thoughts on the collection:

Love Birds was cute but ultimately a little too simple and sweet for my personal taste. I've read some of Clipston's other stuff in the past and ran into the same issue: cutesy stories but largely a little too safe and bland for me.

I think Bid For Love might have been my favorite of the bunch. I found Ezra's covering up his shyness with butter hoarding endearing and later when we see just how big his heart is when he opens up, I was completely sold on this couple :-) Here again, I've read some of Fuller's previous stories and I find that she writes characterizations really well, I never seem to find them too stale or cliche but just right.

Sweeter Than Honey had a nice warmth to it, but Isabella was a bit of a tougher sell for me than some of the other characters. Good thing this story was only novella length because she didn't seem like she wanted to wait for Will THAT long.

Love In Store had a good little cozy mystery written into the plot, and I liked that it featured an older couple. I thought that was a unique element that you don't see in stories much. I enjoyed David's easy going way of moving through life, which came in handy as he got to know Stella, who initially comes off as a big ol stick in the mud type but eventually learns to loosen up around him.

This collection as a whole was nicely done, I thought. The writing is solid, the characters (for the most part) plenty interesting. Not too many twists and turns within the plot, but the well-crafted banter kept me happily turning pages.