The Power Of Broke by Daymond John with Daniel Paisner 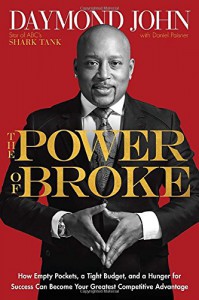 Daymond John has been practicing the power of broke ever since he started selling his home-sewn t-shirts on the streets of Queens. With no funding and a $40 budget, Daymond had to come up with out-of-the box ways to promote his products. Luckily, desperation breeds innovation, and so he hatched an idea for a creative campaign that eventually launched the FUBU brand into a $6 billion dollar global phenomenon.  But it might not have happened if he hadn’t started out broke - with nothing but a heart full of hope and a ferocious drive to succeed by any means possible. Here, the FUBU founder and star of ABC’s Shark Tank shows that, far from being a liability, broke can actually be your greatest competitive advantage as an entrepreneur. Why?  Because starting a business from broke forces you to think more creatively.  It forces you to use your resources more efficiently. It forces you to connect with your customers more authentically, and market your ideas more imaginatively. It forces you to be true to yourself, stay laser focused on your goals, and come up with those innovative solutions required to make a meaningful mark. Drawing his own experiences as an entrepreneur and branding consultant, peeks behind-the scenes from the set of Shark Tank, and stories of dozens of other entrepreneurs who have hustled their way to wealth, John shows how we can all leverage the power of broke to phenomenal success.

Entrepreneur Daymond John is perhaps best known for being the creator (or one of them, at least) of the FUBU (For Us By Us) clothing line. With barely $40 to his name and an honest love for fashion, he built the brand up to a 6 billion dollar industry. Years later, his success caught the attention of television producer Mark Burnett, who invited him to join a panel of financial experts for a show he was building. A show we now know as Shark Tank. In this book, John shares some of the story to his own path to success -- from being raised by a single mom who took out a second mortgage to finance his future, to his food service industry jobs, to now having an office on the 66th floor of the Empire State Building -- as well as some behind-the-scenes stories from the Shark Tank show. He also offers tips and tricks to success he's picked up over the years. The primary rule he stresses is something he likes to call "the power of broke" -- the idea being that being at a disadvantage when you're just getting started can actually be an asset!  Those who start with nothing are hungrier for success, more motivated to make their dreams happen. Their lack of resources also often makes them better equipped to come up with more creative, out of the box kind of solutions to business setbacks. John also stresses the importance of being authentic when it comes to creating your brand / image and the power one can find in being true to yourself rather than placing all your bets on bandwagon trends that will likely fade out quick.

But here's the thing: the power of broke only works in your favor if you recognize it, tap into it, put it to work. Broke, on its own, is just broke. If you let broke beat you down, if you let it break you, you'll never find a way to thrive or even survive. You'll never lift yourself up and out and onto great things. But if you look broke in the face, if you define it, own it, make it part of who you are and how you go about your business... well, then you've got something, people.... I am suggesting that there are all kinds of ways to turn every strike against you into an opportunity. I am suggesting that if you're dealt a lousy hand, you can find a way to play it in a winning way. And I am suggesting that being broke can actually be an advantage for you in business -- being broke forces you to be aggressive, creative, resourceful... all those good things. It forces you to be realistic about your pace of growth and keeps you from letting your hopes and dreams run away from you. It pushes you to think about what's in reach. And it reminds you to keep you true to yourself.

I do enjoy watching the Shark Tank show and I was interested in this book because Daymond John is one of my favorite "sharks" on the show. I found myself a little disappointed with this book though. I felt for all the experiences he's had, he doesn't bring much of anything new to the table. It's pretty much just standard business advice book type stuff here -- he recommends setting realistic, obtainable goals for yourself, thoroughly research your field / market, be passionate about your work, etc. I wasn't all that impressed with the writing style either. The heavy-handed sports and shark metaphors (He even quoted Dory from Finding Nemo at one point. No joke.) got old quick and it felt like whole passages were written around quotes from motivational posters. I felt like I was back in jr high having to listen to my gym teacher do one of his pep talks while wearing one of his motivational sports quote t-shirts (seriously, the guy never seemed to go a day without wearing one). It drove me crazy that this book is stressing the importance of having an authentic voice, yet the tone of the book itself reeked of someone trying too hard to get / stay in with the cool crowd. There were also some phrases that were annoyingly (in their repetitive appearance) overused -- "better believe it". "firing on all cylinders", "do a solid".

That's not to say there's nothing good here. He does have some motivating words, my issue was just that most everything he had to say felt like it was essentially covered in the first 2-3 chapters, with the rest of the book just being mostly reiteration or filler. Some things I did like / take away from this: I enjoyed the "Power Facts" blurbs scattered throughout the text.

I found the bit about Nick Woodman especially interesting, how he sold bead and shell belts out of a VW bus to raise money to cover the $10,000 cost of launching GoPro. Being a dyslexic myself, I appreciated John sharing his experiences being one as well and liked that he has inspiring words for those who have struggled with this learning disorder. I enjoyed the behind the scenes stories from Shark Tank, learning more about the people behind those success stories. My favorites were the rags-to-riches story of tv producer Mark Burnett and the BTS story behind the episode featuring Mo's Bows.

FTC Disclaimer: BloggingForBooks.com and Crown Business Publishing kindly provided me with a complimentary copy of this book in exchange for an honest review. The opinions above are entirely my own.