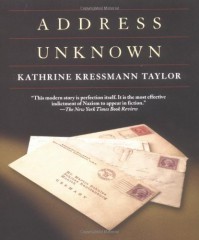 A rediscovered classic, originally published in 1938 -- and now an international bestseller. When it first appeared in Story magazine in 1938, Address Unknown became an immediate social phenomenon and literary sensation. Published in book form a year later and banned in Nazi Germany, it garnered high praise in the United States and much of Europe. A series of fictional letters between a Jewish art dealer living in San Francisco and his former business partner, who has returned to Germany, Address Unknown is a haunting tale of enormous and enduring impact.

This quick little epistolary novel (only 68 pages!) uses a series of letters between two men to show the progression of Adolf Hitler's rise to power in Germany in the months leading up to World War 2, and how his overall influence over the Germany people came to break up this one particular friendship. Max and Martin start out as friends and business partners of an art gallery in San Francisco, California. Martin, of German heritage, decides to move his family back to Germany. He keeps up social and business contact with Max, a Jew, for a time. Martin's letters speak of the desperation of Germany's impoverished, their frustrations and dissatisfaction with the government prior to Hitler coming in. Of Hitler Martin speaks glowingly, referring to him as "Gentle Leader".

It's after Martin writes of his decision to get involved in local politics that the friendship experiences a shift. Martin's letters increasingly express discomfort with his continued association with Jewish Max, until one letter finally says all further contact must be cut off. Max is confused and heartbroken, writing that he considered Martin to be like a brother all these years they've known each other.... Martin's response letter accuses Max of being sentimental, knocks the entire Jewish race and then essentially ends with"Well, sucks for you, now seriously -- stop writing me."

Max is ready to accept Martin's request, until he gets word that his sister, who is a stage actress traveling across Europe (and who, the letters hint, had a more than platonic acquaintance with married Martin at one point...), her current production taking her to Berlin. He gets a few letters from his sister but then correspondence mysteriously stops. When one of his letters to her comes back marked "Address Unknown", Max writes once again contacts Martin, pleading with him to find her and make sure she's safe. I won't say more than that because it's after this point that the drama amps up pretty quick.

There's a surprisingly intense story in these few letters! Much is merely hinted at, leaving the reader to make their own connections, which is where I think the intensity of the story lies. This felt especially true with the last 2-3 letters and then the image of the envelope at the very end that again hinted at what might have transpired, given what the reader had learned up to that point.

Originally published in 1938 in Story Magazine, publisher house Simon and Schuster came around a year later and decided they wanted to publish the letters in book form. Katherine Taylor's husband thought the letters, even as fiction, were "too strong" to be published under a woman's name so they were simply published under Kressman Taylor, a pen name she continued to use for the rest of her writing career. While the story was pretty much an instant success across America and much of Europe, it was actually banned in Nazi Germany (no surprise there, considering...)

If you enjoy World War 2 novels or history in general, this is a great supplemental read that can easily be read in under an hour and gives a sad but thought-provoking aspect to what we know of the era. Highly recommend at least giving it one read!