When Henry was a child, something terrible happened in the woods behind his home, something so shocking he could only express his grief by drawing pictures of what he had witnessed. Eventually Henry's mind blocked out the bad memories, but he continued to draw, often at night by the light of the moon.Twenty years later, Henry makes his living by painting his disturbing works of art. He loves his wife and his son and life couldn't be better... except there's something not quite right about the old stone farmhouse his family now calls home. There's something strange living in the cramped cellar, in the maze of pipes that feed the ancient steam boiler. A winter storm is brewing and soon Henry will learn the true nature of the monster waiting for him down in the darkness. He will battle this demon and, in the process, he may discover what really happened when he was a child and why, in times of trouble, he thinks: I paint against the darkness.
But will Henry learn the truth in time to avoid the terrible fate awaiting him... or will the thing in the cellar get him and his family first? Written as both a meditation on the art of creation and as an examination of the secret fears we all share, The Painted Darkness is a terrifying look at the true cost we pay when we run from our grief—and what happens when we're finally forced to confront the monsters we know all too well.

A friend of mine read this recently and said it was great, but pretty dark and creepy. It was definitely that and more. The Painted Darkness is a sort of parable, opening with the image of a boy who comes running out of the woods terrified and bloodied, but initially it isn't explained why. The story then jumps to the boy, Henry, all grown up, but still tormented by something. Again, what "it" is is kept intentionally vague until just the right moment.  The story then alternates between what is going on in present day with adult Henry and little glimpses of what happened that day in the woods, each "boyhood" chapter revealing one more part of the secret.

Adult Henry is an artist, painting different versions or POVs of the same painting, though he doesn't realize it at first. The painting comes to illustrate how fighting inner demons can be a daily battle, a war won through small daily victories, learning how to have them work for you instead of against you. Henry's literal meaning of his paintings is explained later on in the book, but I actually interpreted it differently than the explanation given.

I saw it as Henry (the dark, tormented part of him) as the monster, his wife and kid as the princess guarding the boy, giving the message to address your demons before they destroy the ones you love.

...today's blank canvas... The canvas stares back at him and the sensation is unsettling. The white space has never felt so huge -- like the emptiness is trying to pull him into an inescapable void. The fear of having hit a permanent creative roadblock is stronger than ever.

"Just start at the beginning," Henry whispers as he closes his eyes. He takes a deep breath and adds, "I paint against the darkness."

Finally, after hours of self-imposed isolation, stars appear in the empty place behind Henry's eyelids -- and then there's a burst of color in the distance. The stone wall in his mind starts to crumble --- a few pieces near the edges at first and then larger sections in the middle -- and finally Henry pushes through his accumulated worries to the place where the images were trapped, just waiting to be released.

His paintings appeal to collectors who still worry about monsters lurking in the darkest corners of their bedrooms and deep in their hearts.

Henry never addressed the trauma of whatever happened that day in the woods, so the trauma (in the form of this "monster") starts to physically manifest itself, at least in Henry's mind. Though the monster makes appearances throughout the entire novella, Henry always seems to survive the encounters, even when he's pretty sure he's going to die...another good message -- as bad as it may seem, have the faith and courage to persevere, use that to carry you through to the other side alive and grateful for the experience.

This is one of those stories where it feels like you can't say too much without risking a spoiler so I'll just leave it at yeah, check this one out!! I loved the simple, direct writing style and while I guessed the ending in the opening pages (at least an element of it), I wasn't disappointed in the reading one bit. I look forward to getting into Freeman's other works!

Added Bonus: There's also some beautiful illustrations throughout the book, done by Jill Bauman. Example below 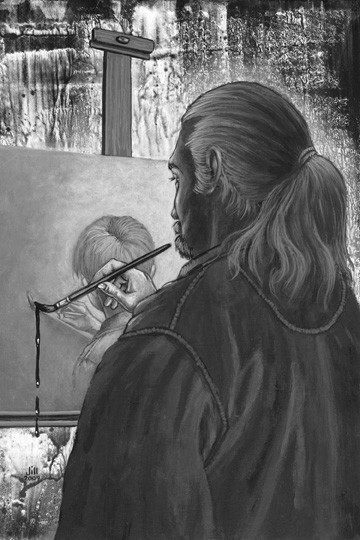 books with some edge