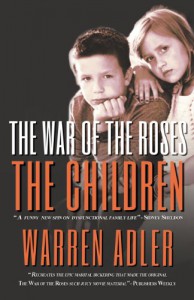 Warren Adler’s The War of the Roses leaped onto the public consciousness and has since remained an essential thread in a wider tapestry of divorce iconography. Now, Adler presents us with the chandelier-shattering legacy of Barbara and Jonathan Rose relived in their children Josh and Evie in a hilarious sequel to the original iconic tale about the perils of marriage, divorce and the destructive power of materialism.Unlike the legendary Roses, Josh’s marriage to Victoria should have all the qualities of an everlasting union. But when an innocent caper involving missing Milky Ways catapults out of control at their son’s elite private school, the pair find themselves entering into a shattering warfare of a different kind. Armed with the emotional mayhem inherited from their parents, as well as compounded pressures involving a depraved headmaster, clandestine affairs and Victoria’s male-hating mother, The War of the Roses – the Children presents a gripping story of the lengths to which parents will go to protect their children. Little more than a child herself, Josh’s ever sympathetic and over-stuffed sister Evie lavishes her ‘food-is-love’ obsession on her beloved niece and nephew coping with their own sense of loss. Meanwhile, Michael and Emily, soon-to-be children of divorce, orchestrate their own plan to keep their family together at all costs. Adler, once again, demonstrates his storytelling mastery by revealing the intricate blending of the past with the present, and how time unravels all things seemingly perfect to be darkly and even comically dysfunctional.

** I was sent an e-book of War Of The Roses:The Children as part of Warren Adler's book giveaway promotion to book bloggers to promote his works and their upcoming movie adaptations and in return was asked to offer an honest review. ~EFR

Did I really just read that The War of the Roses might be turned into a musical?! I think I'd kinda like to see that!

oh and how we gonna split up all this crap?♫

I initially thought the story would pick up pretty close to the end of the first book, but we actually meet back up with Evie and Josh as full grown adults well out of their college years. Josh married with kids, Evie the doting aunt.

This story really illustrates how the feud between Barbara and Oliver from Book 1 emotionally damaged each child down to their core, their individual personalities becoming disguises for the psychological scars created from the devastating implosion of their parents' marriage.

Josh is now married to Victoria, a lawyer and the one who clearly wears the pants in the relationship. Coincidentally, Victoria has her own inner scars, being raised by a single, embittered mom who never let Victoria forget that they were both abandoned by Victoria's father. When Victoria and Josh have their own children, they both seem to feel the need to compensate for the broken family histories they come from, so they try to become super-parents, meaning rigid schedules, no junk food, insistence on stellar grades. Josh insists his meals only be for fuel. Oh, and he has a slight phobia of chandeliers... understandable, I'd say...

Meanwhile, Victoria looks at her sister-in-law Evie as a gluttonous, obese, joke of a woman. In reality, food is Evie's way of coping with her trauma. Remembering Barbara's catering background, Evie sees food as a way to connect with happier memories, so she learns all of her mother's recipes, plying people with luxurious comfort foods to show she loves them. Eve also never developed any marketable skills, so her income is pretty much entirely reliant on the sale of her parents' antiques that weren't destroyed in the epic house battle from Book 1.

History repeats itself in this sequel when Victoria ends up requesting a divorce from Josh after he feels compelled to come clean about something (and rightfully so) that's been eating him up. And once again we have the wife asking for insane amounts in settlement money because she "lost out on career opportunities". What is with these women?! If you decided you marry, you made a choice! YOU! You can't hold that against your spouse later!

Concurrently, we also see Victoria dealing with Mr. Tatum, the principal at her son Michael's school, blackmailing her to keep Michael from being expelled over what I thought was a pretty silly matter to make a big drama over. I was more shocked to read Victoria going along with this guy. I just wanted to jump in there and be like "WHOA... woman, what are you doing?! No! You don't buckle, you fight dirtier!" And that Mr. Tatum -- ugh. That character just made me want to do a deep scrub, he was so skeevy!

Speaking of other ugly characters -- Victoria's mother. She was a special kind of bitter, evil hag. The definition of man-hater! Something about her I found reminiscent of the grandmother from V.C. Andrews' Flowers In The Attic. Not in violence, just in tone when she spoke. She always had such venom that she tried to use to turn others to her way of thinking.

Though this novel seemed to have a quicker pace than Book 1, I missed the tension and dark humor that can be found in the original War Of The Roses. I also found myself a little more entertained by Barbara and Oliver than Josh and Victoria in this one. They sometimes struck me as pretty whiney and immature for their age, though I give them props for not turning their relationship quite as acidic as the previous generation! And I really liked Evie here, though she sounds different -- in this novel, she almost sounds as if she emotionally regressed, which is actually understandable, considering.

While the first novel in this duology illustrated the dangers of putting the most importance on material things, rather than family, this continuation novel brings to light how choices of one generation can trickle down and negatively affect the next branch on the family tree... and so on, and so on... until hopefully one generation comes along who is strong enough to "break the cycle". The title of the novel also seems to have a double meaning because while we get to see what became of Barbara and Oliver's children, we also meet the children of Josh and Victoria and how the disintegration of that marriage affects this new generation of children.

*A heads up to readers: this novel is quite a bit more sexually explicit than its predecessor, in graphic language and descriptions of sexual acts. Just thought I would mention this in case this is an issue for potential readers.