Baltimore, 1849. The body of Edgar Allan Poe has been buried in an unmarked grave. The public, the press, and even Poe’s own family and friends accept the conclusion that Poe was a second-rate writer who met a disgraceful end as a drunkard. Everyone, in fact, seems to believe this except a young Baltimore lawyer named Quentin Clark, an ardent admirer who puts his own career and reputation at risk in a passionate crusade to salvage Poe’s. As Quentin explores the puzzling circumstances of Poe’s demise, he discovers that the writer’s last days are riddled with unanswered questions the police are possibly willfully ignoring. Just when Poe’s death seems destined to remain a mystery, and forever sealing his ignominy, inspiration strikes Quentin–in the form of Poe’s own stories. The young attorney realizes that he must find the one person who can solve the strange case of Poe’s death: the real-life model for Poe’s brilliant fictional detective character, C. Auguste Dupin, the hero of ingenious tales of crime and detection.
In short order, Quentin finds himself enmeshed in sinister machinations involving political agents, a female assassin, the corrupt Baltimore slave trade, and the lost secrets of Poe’s final hours. With his own future hanging in the balance, Quentin Clark must turn master investigator himself to unchain his now imperiled fate from that of Poe’s.

The Poe Shadow is a fictionalized story based on real research Pearl did on Poe's life and the mysterious facts and events surrounding his death. This book looks at the possibility that Poe's end was not just the sad end of a drunken bender gone too far but maybe the work of unknown or unsuspected Poe enemies. The story discusses possible political ties to Poe's death with Poe being found half dead outside of a voting station during an election year. I was always under the impression that Poe was found dead in the street but he was actually found alive and died in a hospital 4 days later, his last words being "Lord, help my poor soul!". Poe was given a small and brief funeral with only 4 mourners -- a colleague of Poe's, a former classmate, and two of his relatives. He was then buried in an unmarked grave (the site has since been identified, famously becoming the site of the yearly visit of the mystery Toaster , a person dressed in dark hat and white scarf who leaves roses and a bottle of cognac on the grave on the anniversary of Poe's birthday, January 19th. The visitor hasn't been seen the last couple years, sparking speculation that the tradition has come to an end). ** I originally wrote this post in 2012, shortly after that saw an article that reported that, in fact, the Toaster tradition had indeed seemingly been put to an end. 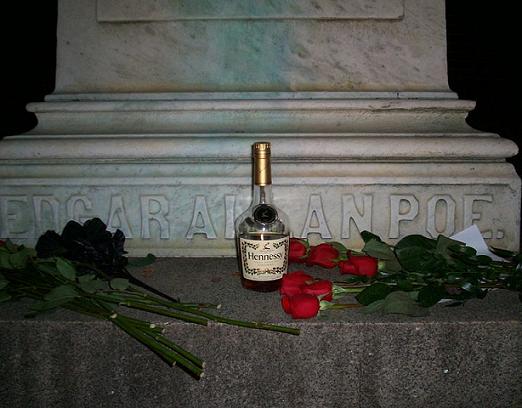 The fictional character, Quentin Clark, acquaintance and legal advisor (through letters), and avid reader of Poe, is deeply affected by the writer's untimely death and feels compelled to go on his own personal investigation to find the truth about what happened that night.

" 'So much for the death of Edgar Poe,' Snodgrass now remarked sullenly to the Baron. 'I should hope you are satisfied and do not aim to put further light onto Poe's sin. His failings have been mourned enough in public, and I have done everything I can not to say more of it for the time.'

' In that, Doctor, you have nothing to worry about,' said the Baron. 'Poe took nothing to drink.'

'Why, what do you mean? I have no doubt. It was a debauch, sir, that killed Poe. His disease was mania a potu, even as the papers reported. I am a possessor of the facts.'

'I am afraid you witnessed facts,' said the Baron with a grin, 'and may even possess them, but you fail to possess the truth.' The Baron Dupin put up his hand to silence Snodgrass's protest. 'You need not trouble to defend yourself, Dr. Snodgrass. You did your best. But it was not you sir, nor was it any manner of alcohol that brought Edgar Poe low. There were forces quite more devilish turned against the poet that day. He shall yet be vindicated.' "

Poe's stories popularized the use of ratiocination -- as Pearl explains it, "employing one's imagination to achieve analysis, and one's analysis

to climb the heights of imagination".

I had mixed feelings about this book. On one hand, Pearl is incredibly talented as a writer. I was really impressed that a modern writer could so believably mimic the tone of Poe's own works. This novel is so atmospheric! Pearl's attention to detail lets you feel the foggy, rain slicked streets of Baltimore, the worn stranger's clothes found on Poe's body --- these elements were really interesting to me. The downside of the novel is that somewhere in the middle it felt like the characters were all stuck in these back and forth arguments and simultaneous races for finding the truth (Quentin finds there are others who also want to find out the secrets of Poe's life, though for different reasons) but these moments seem to get stuck in some sort of whirpool where the story stalls, not really moving forward the way one might expect. As the reader, I felt myself wanting to call time out and tell the characters to re-focus! The story picked up with the courtroom drama near the end but then the ending again seemed like "And that's all there was to that"... it just all ended with this sort of "meh" feeling. You ever read one of those books where it almost feels like by the end even the author was just wanting to wrap things up already? It also got confusing at times keeping the characters of Dupin and Duponte straight.

I'd say this book is worth reading even just for the entertaining character of Bonjour, the mysterious Frenchwoman Quentin meets through his investigations. Yes, Bonjour is a nickname but I'll let you read the book to find out the backstory there. Pretty neat piece of history! Bonjour is a mix of spy, thief, enchantress -- reminded me a little bit of a Bond girl! Bonjour has a really fun personality full of sass, wit and sort of smoke and mirrors kind of entrances and exits. She takes on disguises, effortlessly pulls secret info from people, all the while maintaining mystery and allure to men everywhere. 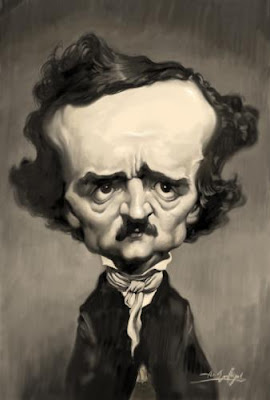